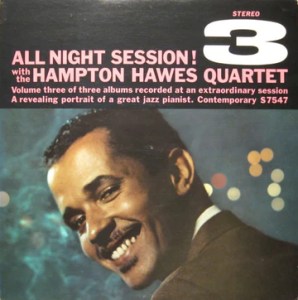 What The Best Sides Of All Night Session, Vol. 3 Have To Offer Is Not Hard To Hear

What We’re Listening For On All Night Session, Vol. 3

Do Nothin’ Till You Hear From Me
Blues #3

Between The Devil And The Deep Blue Sea
Blues #4

Vol. 3 of the Hampton Hawes Quartet’s All Night Session contains three spontaneously improvised variations on the blues, one very cool extended rendition of Duke Ellington’s “Do Nothin’ ‘Till You Hear from Me” and a strikingly handsome treatment of Harold Arlen’s “Between the Devil and the Deep Blue Sea.” The briskly paced “Blues #4” is especially progressive and exciting. Apparently “Blues of a Sort” was a warm-up performance, as voices are audible (discussing a football game!) in the background during the bass solo. For this one-take marathon late-night session of November 12 and 13, 1956, Hawes chose to share the studio with guitarist Jim Hall, bassist Red Mitchell and drummer Eldridge “Bruz” Freeman, who had replaced Chuck Thompson following that musician’s sudden inability to continue touring with the group earlier that year. “We gave Chuck what money we could and left him sitting on a hospital cot in a white bathrobe.” This grim image, like much of Hawes’ autobiography Raise Up Off Me, paints a stark picture of the narcotics epidemic among jazz musicians during the ’50s. Although this was the first peak of his career, Hawes later admitted that “during the fall of 1956 I was messing up consistently — showing late on gigs or missing them altogether.” He had lots of offers for work, including the possibility of providing music for a film soundtrack: “Wanted to do it, would have paid good, but at the time I didn’t even have the bread to get high enough to get to the studio to see what they had in mind.” One of the great incongruities of bop is the fact that Charlie Parker and the musicians who were most directly influenced by him were able to be so creative and prolific while grappling with addictions that confounded, immobilized, and eventually slew them. All of these insights quietly swarm beneath the surface of what added up to more than two hours of exceptionally fine quartet jazz.

In 1958 Hawes was quoted as saying, “It’s hard to put into words how good it feels to play jazz when it’s really swinging…I’ve reached a point where the music fills you up so much emotionally that you feel like shouting hallelujah — like people do in church when they’re converted to God. That’s the way I was feeling the night we recorded All Night Session!”