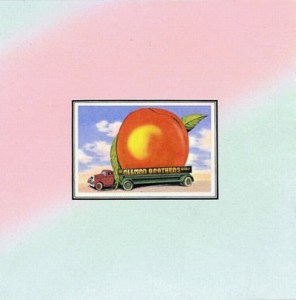 What do such high grades give you for this album? Tubey Magical guitars, huge whomp factor on the bottom end, incredible dynamics and life, shocking transparency and clarity, and the kind of immediacy that puts these crazy southern rockers right in your very own living room.

This and Live At Fillmore East are the two most monumental albums these guys ever put out, and they have a lot in common. You know what you’re gonna get with the Allmans: dueling electric guitars, sweet acoustic guitars, energetic drumming, and full-bodied vocals throughout.

There’s obviously a lot of exploration — two complete sides are dedicated to the song “Mountain Jam” — but the heartfelt radio-friendly songs such as “Melissa” and “Little Martha” keep up the energy and provide maximum enjoyment factor.

A superb copy like this one really lets everything that’s great about this music come through. You can easily pick out each of the musicians and follow their contributions over the course of the songs. The huge WHOMP factor throughout kicks up the excitement factor and sets the foundation for the extended guitar jams to work their Southern bluesy magic. The top end extends beautifully to really bring out the ambience and spaciousness of the Fillmore.

Having just finished playing a big ol’ stack of these albums, we can tell you that most of them didn’t sound very good. The majority of pressings are thick and opaque and lack the energy needed to bring the music to life.

We haven’t played a MoFi of this in years, but we can’t imagine they’d be able to make any sense of the punchy, rock ’em-sock ’em bottom end that’s the hallmark of this album and the band’s music in general. Tubby half-speed bass on the extended bass solo during “Mountain Jam”? No thank you.

What We’re Listening For On Eat A Peach

Eat A Peach is a recording that belongs in any serious Rock Music Collection. Others that belong in that category can be found here.

A tribute to the dearly departed Duane, Eat a Peach rambles through two albums, running through a side of new songs, recorded post-Duane, spending a full album on live cuts from the Fillmore East sessions, then offering a round of studio tracks Duane completed before his death.

On the first side, they do suggest the mellowness of the Dickey Betts-led Brothers and Sisters, particularly on the lovely “Melissa,” and this stands in direct contrast with the monumental live cuts that dominate the album.

They’re at the best on the punchier covers of “One Way Out” and “Trouble No More,” both proof of the group’s exceptional talents as a roadhouse blues-rock band, but Duane does get his needed showcase on “Mountain Jam,” a sprawling 33-minute jam that may feature a lot of great playing, but is certainly a little hard for anyone outside of diehards to sit through.

Apart from that cut, the record showcases the Allmans at their peak, and it’s hard not to feel sad as the acoustic guitars of “Little Martha” conclude the record, since this tribute isn’t just heartfelt, it offers proof of Duane Allman’s immense talents and contribution to the band.