More Reviews and Commentaries for A Hard Day’s Night 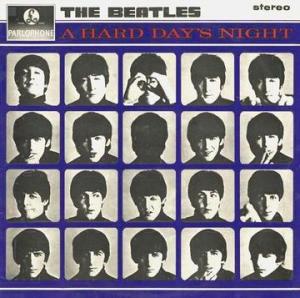 Drop the needle on any song on either side to see why we went crazy over this one. The emotional quality of the boys’ performances really comes through on this copy. They aren’t just singing — they’re really BELTIN’ it out. Can you imagine what that sounds like on the title track? We didn’t have to imagine it, WE HEARD IT!

There are two important traits that all the best copies have in common. Tonally they aren’t bright and aggressive (which eliminates 80 percent of the AHDN pressings you find), and they have a wonderful midrange warmth and sweetness that brings out the unique quality of the Beatles’ individual voices and harmonies.

When comparing pressings of this record, the copies that get their voices to sound present, while at the same time warm, smooth, and sweet, especially during the harmonies and in the loudest choruses are always the best. All the other instruments seem to fall in line when the vocals are correct. This is an old truism — it’s all about the midrange — but in this case, it really is true.

This music has a HUGE amount of upper midrange and high-frequency information. (Just note how present the tambourines are in the mixes.) If the record isn’t cut properly or pressed properly for that matter, the sound can be quite unpleasant. (One of our good customers made an astute comment in an email to us — the typical copy of this album makes you want to turn DOWN the volume.)

Play it against your MoFi or Heavy Vinyl pressing and you will quickly see why those remastered LPs bore us to tears. Who in his right mind would want to suffer through a boring Beatles record when you can hear how much life and joy there is in these songs even playing over the radio!?

What We’re Listening For on A Hard Day’s Night

Those of you looking for quiet vinyl will have to settle for the sound of later pressings and Heavy Vinyl reissues, purchased elsewhere of course as we have no interest in selling records that don’t have the vintage analog magic of these wonderful pressings.

It also ranks fairly high on our Difficulty of Reproduction Scale. Do not attempt to play it using anything other than the highest quality equipment.

A word of caution: Unless your system is firing on all cylinders, even our hottest Hot Stamper copies — the Super Hot and White Hot pressings with the biggest, most dynamic, clearest, and least distorted sound — can have problems . Your system should be thoroughly warmed up, your electricity should be clean and cooking, you’ve got to be using the right room treatments, and we also highly recommend using a demagnetizer such as the Walker Talisman on the record, your cables (power, interconnect and speaker) as well as the individual drivers of your speakers.

This is a wonderful example of The Beatles’ harmonies at their best. Toward the end of the song, during one of their harmonic excursions, you can hear John’s voice drop out when something apparently catches in his throat, and I could swear that you can hear Paul McCartney react to it with a little laugh.

If their voices sound warm, sweet, and transparent on this track, at the very least you have a contender, and possibly a winner. Not many pressings are going to bring out all the qualities of their voices.

Always starts with a bit of grit and grain, but sounds better by the second verse.

Any Time at All
I’ll Cry Instead

This track has a tendency to sound a bit aggressive on even the best copies. The copies with extended highs and a tonally correct midrange are really going to excel on this track.

This track is really rich and full-bodied on the best copies. It’s got wonderful Tubey Magic that is positively intoxicating.

When I Get Home

Another one with a lot of potentially aggressive qualities. If you can play this song good and loud, you must have an excellent copy. (More cowbell!)

You Can’t Do That
I’ll Be Back

A Hard Day’s Night not only was the de facto soundtrack for their movie, not only was it filled with nothing but Lennon-McCartney originals, but it found the Beatles truly coming into their own as a band. All of the disparate influences on their first two albums had coalesced into a bright, joyous, original sound, filled with ringing guitars and irresistible melodies. A Hard Day’s Night is where the Beatles became mythical, but this is the sound of Beatlemania in all of its giddy glory.

Decades after its original release, its punchy blend of propulsive rhythms, jangly guitars, and infectious, singalong melodies is remarkably fresh. There’s something intrinsically exciting in the sound of the album itself, something to keep the record vital years after it was recorded. Even more impressive are the songs themselves… [E]verything on the record is performed with genuine glee and excitement. It’s the pinnacle of their early years.