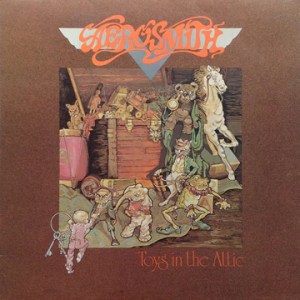 If you’re looking for great sound for this fun album, you’ve come to the right place. This is raw, down-and-dirty blues-rock in the tradition of the Stones and the Faces, and when it sounds this good it sure is a blast to listen to.

I never really cared much for this band until recently, when I heard “Sweet Emotion” on my local classic rock station (The Octopus!) and realized that it would probably sound pretty amazing on a Hot Stamper vinyl version. Boy, was I right! It took quite a few copies and a whole lot of work, but the best sounding tracks on this album sound amazing. “Sweet Emotion” and “Walk This Way” are going to rock like they have never rocked before.

Of course, not every copy sounds like this one. We pick these up when we find them and I’m sorry to report that most of them leave much to be desired. If your copy is dull or smeary as so many of them are, you won’t get the full effect of this raw, ballsy rock ‘n’ roll. All you have to do is drop the needle on the intro to “Sweet Emotion” and you’ll see why we decided to roll with our shootout.

That’s not to say this is an amazing, top-shelf recording, but it certainly beats most of the dreck out there that passes for Audiophile-style classic rock. (If you disagree, I’ve got a nice copy of the Sheffied Track Record to sell you.)

What We’re Listening For On Toys in the Attic

After nearly getting off the ground with Get Your Wings, Aerosmith finally perfected their mix of Stonesy raunch and Zeppelin-esque riffing with their third album, Toys in the Attic. The success of the album derives from a combination of an increased sense of songwriting skills and purpose. Not only does Joe Perry turn out indelible riffs like “Walk This Way,” “Toys in the Attic,” and “Sweet Emotion,” but Steven Tyler has fully embraced sleaziness as his artistic muse. Taking his cue from the old dirty blues “Big Ten Inch Record,” Tyler writes with a gleeful impishness about sex throughout Toys in the Attic, whether it’s the teenage heavy petting of “Walk This Way,” the promiscuous “Sweet Emotion,” or the double-entendres of “Uncle Salty” and “Adam’s Apple.” The rest of Aerosmith, led by Perry’s dirty, exaggerated riffing, provide an appropriately greasy backing. Before Toys in the Attic, no other hard rock band sounded like this. Sure, Aerosmith cribbed heavily from the records of the Rolling Stones, New York Dolls, and Led Zeppelin, but they didn’t have any of the menace of their influences, nor any of their mystique. Aerosmith was a gritty, street-wise hard rock band who played their blues as blooze and were in it for a good time; Toys in the Attic crystallizes that attitude.