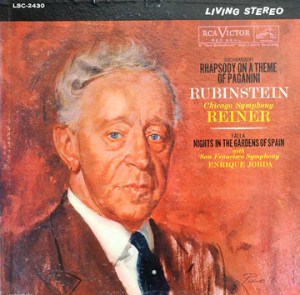 Until we heard the right later pressings, we had always been disappointed with this TAS List recording, wondering what all the fuss was about.

Well, now we know. The early Shaded Dog pressings have consistently worse sound than the reissues we are offering here.

We never offered the record in Hot Stamper form because we didn’t think the sound of the originals was all that impressive, TAS List or no TAS List.

Mystery solved, and truly Hot Stampers have now been made available to the discriminating audiophile.

Harry’s list, as was so often the case, did not provide the information needed to hear the recording properly. Did Harry ever have a good pressing? We’ll never know.

Rhapsody On A Theme Of Paganini, Op.43 – Rachmaninoff

Rhapsody on a Theme of Paganini

After a brief introduction, the first variation is played before the theme. Paganini’s theme is stated on strings with the piano picking out salient notes, after the first variation. Rachmaninoff likely got the idea of having a variation before the theme from the finale of Beethoven’s Eroica symphony. Variations II to VI recombine elements of the theme. The pauses and rhetorical flourishes for the piano in variation VII herald a change of tempo and tone. The piano next gravely intones the Dies Irae, the “day of wrath” plainchant from the medieval Mass of the Dead, while the orchestra accompanies with a slower version of the opening motif of the Paganini theme. The piece is one of several by Rachmaninoff to quote the Dies Irae plainchant melody.

Inversion of the melody

The slow eighteenth variation is by far the most well-known, and it is often included on classical music compilations without the rest of the work. It is based on an inversion of the melody of Paganini’s theme. In other words, the A minor Paganini theme is played “upside down” in D flat major. Rachmaninoff himself recognized the appeal of this variation, saying “This one, is for my agent.”

Nights In The Gardens Of Spain

Nights in the Gardens of Spain (Spanish: Noches en los jardines de España), G. 49, is a piece of music by the Spanish composer Manuel de Falla. Falla was Andalusian and the work refers to the Hispano-Arabic past of this region (Al-Andalus).

Falla began this work as a set of nocturnes for solo piano in 1909, but on the suggestion of the pianist Ricardo Viñes he turned the nocturnes into a piece for piano and orchestra. Falla completed it in 1915 and dedicated it to Viñes. However the pianist at the first performance was neither Viñes nor Falla (who was a skilled pianist), but José Cubiles. The first performance was given on April 9, 1916, at Madrid’s Teatro Real, with the Orquesta Sinfónica de Madrid conducted by Enrique Fernández Arbós.

Viñes first played the work in its San Sebastián premiere, shortly after the world premiere, with the same orchestra. Arthur Rubinstein was in the audience that night, and he introduced the work to Buenos Aires. The Paris premiere took place in January 1920, with the pianist Joaquín Nin playing under Fernández Arbós. The composer himself was the soloist at the London premiere in 1921, at a Queen’s Hall concert under the baton of Edward Clark.