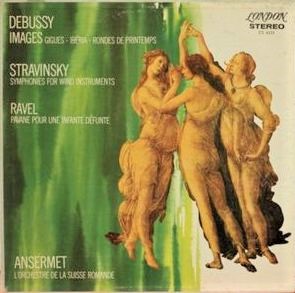 James Walker was the producer, Roy Wallace the engineer for these sessions from 1961 in Geneva’s glorious Victoria Hall. It’s yet another remarkable disc from the Golden Age of Vacuum Tube Recording.

The gorgeous hall the Suisse Romande recorded in was possibly the best recording venue of its day, possibly of all time; more amazing sounding recordings were made there than any other hall we know of. There is a richness to the sound that exceeds all others, yet clarity and transparency are not sacrificed in the least. It’s as wide, deep and three-dimensional as any, which is of course all to the good, but what makes the sound of these recordings so special is the weight and power of the brass and the timbral accuracy of the instruments in every section.

This is the kind of record that will make you want to take all your heavy vinyl classical pressings and put them up for sale. None of them, I repeat not a single one of them, can ever begin to sound the way this record sounds.

What We’re Listening For On Images for Orchestra