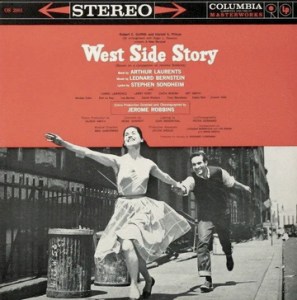 SUPERB sound can be found on this vintage Columbia 360 stereo pressing of the Broadway Cast recording. This is a huge, spacious, natural, exciting All-Tube Golden Age recording that impressed us to no end here at Better Records.

Imagine our surprise when the good sound of these copies turned out to not only have superb sound, but reasonably quiet Mint Minus Minus vinyl too! Don’t expect to see another of this quality any time soon. If we can’t find them, who can?

What We’re Listening For On West Side Story

Tonight
The Rumble
I Feel Pretty
Somewhere
Gee, Officer Krupke
A Boy Like That and I Have A Love
Finale

West Side Story (Original Broadway Cast) is the 1957 recording of a Broadway production of the musical West Side Story. Recorded 3 days after the show opened at the Winter Garden Theatre, the recording was released in October 1957 in both mono and stereo formats.

It was recorded at the CBS 30th Street Studio in New York City.

West Side Story is an American musical with a book by Arthur Laurents, music by Leonard Bernstein, lyrics by Stephen Sondheim, and conception and choreography by Jerome Robbins. It was inspired by William Shakespeare’s play Romeo and Juliet.

The story is set in the West 50s and West 60s of the Upper West Side neighborhood in New York City in the mid-1950s, an ethnic, blue-collar neighborhood. (In the early 1960s much of the neighbourhood would be cleared in an urban renewal project for Lincoln Centre, changing the neighborhood’s character.) The musical explores the rivalry between the Jets and the Sharks, two teenage street gangs of different ethnic backgrounds.

The members of the Sharks from Puerto Rico are taunted by the Jets, a Polish-American working-class group. The young protagonist, Tony, one of the Jets, falls in love with Maria, the sister of Bernardo, the leader of the Sharks. The dark theme, sophisticated music, extended dance scenes, and focus on social problems marked a turning point in American musical theatre.

The original 1957 Broadway production, directed and choreographed by Jerome Robbins and produced by Robert E. Griffith and Harold Prince, marked Sondheim’s Broadway debut. It ran for 732 performances before going on tour. The production was nominated for five Tony Awards including Best Musical in 1957; it won a Tony Award for Robbins’ choreography.

The play spawned an innovative 1961 musical film of the same name, directed by Robert Wise and Robbins. The film won ten Academy Awards out of eleven nominations, including Best Picture.