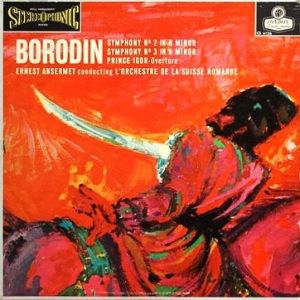 We’ve long considered the album one of the greatest of all the Decca / London recordings.

Big, rich and dynamic, this is the sound of LIVE MUSIC, and it can be yours, to enjoy for years to come — if you’ve got the stereo to play it and the time to listen to it.

The powerful lower strings and brass are gorgeous. Ansermet and the Suisse Romande get that sound better than any performers I know. You will see my raves on record after record of theirs produced during this era. No doubt the world renowned Victoria Hall they recorded in is key. One can assume Decca engineers use similar techniques for their recordings regardless of the artists involved. The only real variable should be the hall.

Ansermet’s recordings with the Suisse Romande exhibit a richness in the lower registers that is unique in my experience. His Pictures At Exhibition has phenomenally powerful brass, the best I’ve ever heard. The same is true for his Night On Bald Mountain. Neither performance does much for me — they’re both too slow — but the sound is out of this world. Like it is here.

The second symphony is a work that audiophiles should love. It shares many qualities with Rimsky-Korsakov’s Scheherazade, which you will surely recognize. It also has some lovely passages that remind me of the Tale of The Tsar Saltan, another work by the same composer. If you like exotic and colorfully orchestrated symphonic sound, you will be hard-pressed to find better.

“Here, Ansermet and the orchestra he founded and led for a half-century imbue the Borodin Second, and especially the scherzo and andante, with uncommon grace, perhaps drawn from Ansermet’s vast experience as a ballet conductor. In any event, Ansermet and others prove that a careful, reticent, well-played performance need not be boring.”

What We’re Listening For On Symphonies 2 & 3

Speakers Corner did a heavy vinyl reissue of this title, which is reasonably good, but like all reissues it lacks the weight found on this original. I remember it being a little flat and bright. I haven’t played it in years so I could easily be wrong. The glorious sound I hear on this pressing is not the kind of thing one hears on 180 gram records by Speakers Corner or anybody else. They do a good job some of the time, but none of their records can compete with the real thing when it’s mastered and pressed properly, as in this case.

Alexander Porfiryevich Borodin (12 November 1833 – 27 February 1887) was a Romantic composer and chemist of Georgian-Russian extraction. He was one of the prominent 19th-century composers known as “The Five”, a group dedicated to producing a uniquely Russian kind of classical music. Borodin is known best for his symphonies, his two string quartets, the symphonic poem In the Steppes of Central Asia and his opera Prince Igor.

Borodin met Mily Balakirev during 1862. While under Balakirev’s tutelage in composition he began his Symphony No. 1 in E-flat major; it was first performed during 1869, with Balakirev conducting. During that same year Borodin started on his Symphony No. 2 in B minor, which was not particularly successful at its premiere during 1877 under Eduard Nápravník, but with some minor re-orchestration received a successful performance during 1879 by the Free Music School under Nikolai Rimsky-Korsakov’s direction. During 1880 he composed the popular symphonic poem In the Steppes of Central Asia. Two years later he began composing a third symphony, but left it unfinished at his death; two movements of it were later completed and orchestrated by Alexander Glazunov.

During 1868 Borodin became distracted from initial work on the second symphony by preoccupation with the opera Prince Igor, which is considered by some to be his most significant work and one of the most important historical Russian operas. It contains the Polovtsian Dances, often performed as a stand-alone concert work forming what is probably Borodin’s best-known composition. Borodin left the opera (and a few other works) incomplete at his death.

Prince Igor was completed posthumously by Rimsky-Korsakov and Alexander Glazunov. It is set in the 12th century, when the Russians, commanded by Prince Igor of Seversk, determined to conquer the barbarous Polovtsians by travelling eastward across the Steppes. The Polovtsians were apparently a nomadic tribe originally of Turkic origin who habitually attacked southern Russia. A full solar eclipse early during the first act foreshadows an ominous outcome to the invasion. Prince Igor’s troops are defeated. The story tells of the capture of Prince Igor, and his son, Vladimir, of Russia by Polovtsian chief Khan Konchak, who entertains his prisoners lavishly and orders his slaves to perform the famous ‘Polovtsian Dances’, which provide a thrilling climax to the second act. The second half of the opera finds Prince Igor returning to his homeland, but rather than finding himself in disgrace, he is welcomed home by the townspeople and by his wife, Yaroslavna. Although for a while rarely performed in its entirety outside of Russia, this opera has received two notable new productions recently, one at the Bolshoi State Opera and Ballet Company in Russia during 2013, and one at the Metropolitan Opera Company of New York City during 2014.

No other member of the Balakirev circle identified himself so much with absolute music as did Borodin in his two string quartets, in addition to his many earlier chamber compositions. As a cellist, he was an enthusiastic chamber music player, an interest that increased during his chemical studies in Heidelberg between 1859 and 1861. This early period yielded, among other chamber works, a string sextet and a piano quintet. Borodin based the thematic structure and instrumental texture of his pieces on those of Felix Mendelssohn.

During 1875 Borodin started his First String Quartet, much to the displeasure of Mussorgsky and Vladimir Stasov; the other members of The Five were known to be hostile to chamber music. The First Quartet demonstrates mastery of the string quartet form. Borodin’s Second Quartet, written in 1881, displays strong lyricism, as in the third movement’s popular “Nocturne.” While the First Quartet is richer in changes of mood, the Second Quartet has a more uniform atmosphere and expression.

Borodin’s fame outside the Russian Empire was made possible during his lifetime by Franz Liszt, who arranged a performance of the Symphony No. 1 in Germany during 1880, and by the Comtesse de Mercy-Argenteau in Belgium and France. His music is noted for its strong lyricism and rich harmonies. Along with some influences from Western composers, as a member of The Five his music has also a Russian style. His passionate music and unusual harmonies proved to have a lasting influence on the younger French composers Debussy and Ravel (in homage, the latter composed during 1913 a piano piece entitled “À la manière de Borodine”).

The evocative characteristics of Borodin’s music—specifically In the Steppes of Central Asia, his Symphony No. 2, Prince Igor—made possible the adaptation of his compositions in the 1953 musical Kismet, by Robert Wright and George Forrest, notably in the songs “Stranger in Paradise”, “And This Is My Beloved” and “Baubles, Bangles, & Beads”. In 1954, Borodin was posthumously awarded a Tony Award for this show.