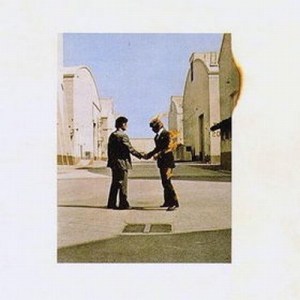 The sound of this very special import pressing is HUGE, open, and spacious like nothing you have ever heard.  It’s also exceptionally transparent, with substantial amounts of depth and three-dimensionality.

There is a huge room around the drums that we guarantee you have never heard sound as big and real as it does on this very record.

Here is the size, energy, and presence to bring the music out of the speakers and right into your listening room!

Everything We Want from Pink Floyd

This is the perfect example of everything we look for in a recording here at Better Records: it’s dynamic, present, transparent, rich, full-bodied, super low-distortion, sweet — good copies of this record have exactly what we need to make us audiophiles forget what our stereos are doing and focus instead on what the musicians are doing.

For those of you who aren’t familiar with the album, Pink Floyd managed to record one of the most amazing sounding records in the history of rock music. The song Wish You Were Here starts out with radio noise and other sound effects, then suddenly an acoustic guitar appears, floating in the middle of your living room between the speakers, clear as a bell and as real as you have ever heard. It’s obviously an “effect,” but for us audiophiles it’s pure ear candy.

What We’re Listening For on Wish You Were Here

A Word About Surface Noise

It is almost impossible to find copies of this album that play better than Mint Minus Minus. There are plenty of quiet passages in the music that expose even minor surface noises, which means there’s always at least something to be heard under the music somewhere.

The moderate and louder sections of the music on a Mint Minus Minus copy will always play well, but those of you who are picky about quiet surfaces (or have noisy cartridges) are advised that even our Mint Minus Minus pressings are going to have some ticky passages.

Of course your satisfaction is 100% Guaranteed, as it is on every record we sell, no questions asked.

Right from the dynamic intro you can tell this is going to be a wild ride. David Gilmour’s haunting guitar line that comes cutting from out of the abyss should be warm with tons of room for his phasers to do their phasing.

After the band comes in and the vocals begin (listen for the man chuckling in the left channel) you should pay attention to the balance of the mix. Most copies tend to be very midrangy which can make the guitars aggressive and harsh, often times taking emphasis away from the vocals. The good copies have lots of transparency and allow everything to sit in their respectively places. This is probably most noticeable during the saxophone solo.

The tenor that starts off this section needs to be breathy, full-bodied, and sitting delicately in the center of your speakers. It does NOT need be be honky and hard sounding without any top extension. As the solo slowly crescendos, notice the guitar line spread across the soundstage that actually bookends the saxophone. The more dynamic copies really let you hear the intricacy and delicacy of his picking that foreshadows the time signature shift about to come.

When the time does change to 6/4, the saxophone player changes to alto, totally changing the sound of the solo! You can clearly hear on the better copies that he is further away from the mike than during the previous section, but if you listen closely, it sounds as though he is moving on and off axis. Whether this is part of his mike technique or him just dancin’ and groovin’ to the music, we may never know. I certainly hope for the latter.

Welcome to the Machine

Have a Cigar
Wish You Were Here
Shine on You Crazy Diamond, Pts. 6-9

Pink Floyd followed the commercial breakthrough of Dark Side of the Moon with Wish You Were Here, a loose concept album about and dedicated to their founding member Syd Barrett. The record unfolds gradually, as the jazzy textures of “Shine on You Crazy Diamond” reveal its melodic motif, and in its leisurely pace, the album shows itself to be a warmer record than its predecessor.

Musically, it’s arguably even more impressive, showcasing the group’s interplay and David Gilmour’s solos in particular. And while it’s short on actual songs, the long, winding soundscapes are constantly enthralling.