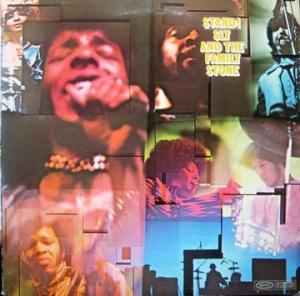 Finally, an outstanding copy of Sly’s classic Stand! album from 1969, one of the few times it has sounded even CLOSE to the way it’s supposed to.

And it’s quiet, a combination that does not come our way very often.

What The Best Sides Of Stand! Have To Offer Is Not Hard To Hear

So Many Good Songs

The consistently high quality of the material is another reason this album has to be considered a Must Own. Did Sly ever release an album with more good songs than these? I put this album up against the best Sly and the Family Stone has ever made.

What We’re Listening For On Stand!

A Must Own Soul and Pop Record

We consider this Sly and the Family Stone album a Masterpiece.

This recording should be part of any serious Collection of Popular Music and Soul Music. Others that belong in that category can be found here.

Stand!
Don’t Call Me Nigger, Whitey
I Want To Take You Higher
Somebody’s Watching You
Sing A Simple Song

Everyday People
Sex Machine
You Can Make It If You Try

Stand! is the pinnacle of Sly & the Family Stone’s early work, a record that represents a culmination of the group’s musical vision and accomplishment. Life hinted at this record’s boundless enthusiasm and blurred stylistic boundaries, yet everything simply gels here, resulting in no separation between the astounding funk, effervescent irresistible melodies, psychedelicized guitars, and deep rhythms. Add to this a sharpened sense of pop songcraft, elastic band interplay, and a flowering of Sly’s social consciousness, and the result is utterly stunning.