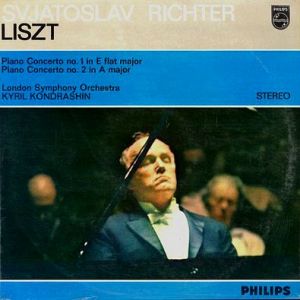 *NOTE: Unlike Concerto No. 1, The Second Piano Concerto opens very quietly, so there will likely never be a vintage pressing of the album that will get that opening to play like a CD. Expect to hear some random ticks, a small price to pay to hear this wonderful performance on top quality analog.

Richter and Kondrashin deliver the finest Liszt 1st & 2nd Piano Concertos I know of, musically, sonically and in every other way. Richter’s performance here is alternately energetic and lyrical, precisely as the work demands. The recording itself is explosively dynamic. The brass is unbelievably full, rich and powerful. You won’t find a better recording of this music anywhere, and this pressing just cannot be beat.

Big and rich (always a problem with piano recordings: you want to hear the percussive qualities of the instrument, but few copies can pull it off without sounding thin). We love the BIG, FAT, Tubey Magical sound of this recording! The piano is solid and powerful — like a real piano.

Huge amounts of hall space, weight and energy, this is DEMO DISC QUALITY SOUND by any standard.

As we noted above, the best pressings of this album are more like LIVE MUSIC than any other classical recording I have played in longer than I can remember. I don’t know of another piano concerto recording that more correctly captures the relationship between the piano and the orchestra. The piano is huge and powerful, yet the percussive and lighter qualities on the instrument are clearly heard in proper relation to the orchestra as a whole.

Some pressings come from Holland. Some are made in Italy. Which country produced the consistently best sound?

This time around one country produced the two best sounding copies. Next time around, who knows which country will win? That’s what shootouts are for.

Liszt sketched his two piano concertos in 1839, during his years of touring the music capitals of Europe, but they lay unfinished until he became court music director at Weimar in 1848. The first ideas for the E-flat Concerto appeared in a notebook as early as 1830, but the score was not completed, according to a letter from Liszt’s eventual son-in-law, the pianist/conductor Hans von Bülow, until June 1849; it was revised in 1853. The premiere was part of a week of gala concerts honoring the music of Hector Berlioz at the Grand Ducal palace in Weimar, thus allowing the French composer to conduct while Liszt played. A memorable evening!

Liszt required of a concerto that it be “clear in sense, brilliant in expression, and grand in style.” In other words, it had to be a knockout. While it was inevitable that the E-flat Concerto would have a high degree of finger-churning display, it was not automatic that it should also be of fine musical quality — but it is. Liszt undertook an interesting structural experiment in the Concerto by fusing the substance of the concerto form with the architecture of the symphony. (“Music is never stationary,” he once pronounced. “Successive forms and styles can only be like so many resting places — like tents pitched and taken down again on the road to the Ideal.”)

Though the work is played continuously, four distinct sections may be discerned within its span: an opening Allegro, built largely from the bold theme presented immediately at the outset; an Adagio that grows from a lyrical, arched melody initiated by the cellos and basses; a vivacious, scherzo-like section enlivened by the glistening tintinnabulations of the solo triangle; and a closing Allegro marziale that gathers together the motives of the preceding sections into a rousing conclusion.

Of the finale, Liszt wrote, “It is only an urgent recapitulation of the earlier subject matter with quickened, livelier rhythm, and contains no new motive…. This kind of binding together and rounding off of a whole piece at its close is somewhat my own, but it is quite maintained and justified from the standpoint of musical form.”

Béla Bartók judged this Concerto, because of its grandiose recall and interpenetration of themes in the finale, to be “the first perfect realization of cyclical sonata form.” It was this formal concept — a single-movement work in several sections utilizing just one or two themes — that Liszt was also to use in his tone poems of the following two decades and in the Second Piano Concerto.

minor is heard as a march in E major later in the work, for instance. The work has not proven as popular as the composer’s first piano concerto but has stayed in the repertoire.

The largest and best known portion of Liszt’s music is his original piano work… Liszt’s piano works are usually divided into two classes. On the one hand, there are “original works”, and on the other hand “transcriptions”, “paraphrases” or “fantasies” on works by other composers…

Liszt also made piano arrangements of his own instrumental and vocal works. Examples of this kind are the arrangement of the second movement “Gretchen” of his Faust Symphony and the first “Mephisto Waltz” as well as the “Liebesträume No. 3” and the two volumes of his “Buch der Lieder”.