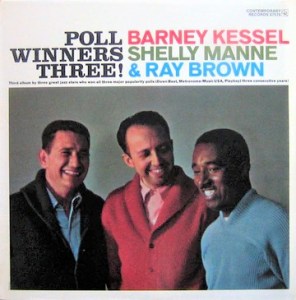 What The Best Sides Of Poll Winners Three! Have To Offer Is Not Hard To Hear

What We’re Listening For On Poll Winners Three!

From 1956-1959, it seemed as if guitarist Barney Kessel, bassist Ray Brown, and drummer Shelly Manne won just about every jazz poll. For their third joint recording, the musicians contributed an original apiece and also performed seven standards. Highlights of the fairly typical but swinging straightahead set include “Soft Winds,” “It’s All Right with Me,” “Mack the Knife,” and “I’m Afraid the Masquerade Is Over.”