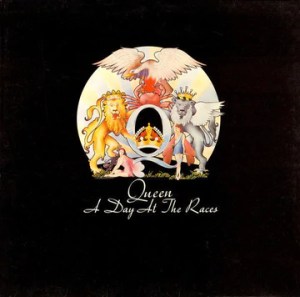 Forget the dubby domestic pressings and whatever crappy Heavy Vinyl record they’re making these days — the UK LPs are the only way to fly.

This British pressing has the kind of Tubey Magical Midrange that most modern records barely begin to reproduce.

Folks, that sound is gone and it sure isn’t showing signs of coming back. If you love hearing INTO a recording, actually being able to “see” the performers, and feeling as if you are sitting in the studio with the band, this is the record for you. It’s what vintage all analog recordings are known for — this sound.

Many copies were gritty, some were congested in the louder sections, some never got big, some were thin and lacking the lovely analog richness of the best — we heard plenty of copies whose faults were obvious when played against two top sides such as these.

What We’re Listening For On A Day At The Races

Three distinctive qualities of vintage analog recordings — richness, sweetness, and freedom from artificiality — are most clearly heard on a Big Production Rock Record like A Day At The Races in the loudest, densest, most climactic choruses of songs like “Tie Your Mother Down” (side one) and “Somebody to Love” (side two).

We set the playback volume so that the loudest parts of the record are as huge and powerful as they can possibly become without crossing the line into distortion or congestion. On some records, Dark Side of the Moon comes instantly to mind, the guitar solos on “Money” are the loudest thing on the record.

On Breakfast In America, the sax toward the end of The Logical Song is bigger and louder than anything on the record — louder even than Roger Hodgson’s near-hysterical multi-tracked screaming “Who I am” about three quarters of the way through the track. Those, however, are clearly exceptions to the rule. Most of the time it’s the final chorus of a pop song that gets bigger and louder than what has come before.

We live for that sound here at Better Records. It’s precisely what the best vintage analog pressings do brilliantly. In fact, they do it so much better than any other medium that there is really no comparison, and certainly no substitute. If you’re on this site you probably already know that.

In every sense, A Day at the Races is an unapologetic sequel to A Night at the Opera, the 1975 breakthrough that established Queen as rock & roll royalty. The band never attempts to hide that the record is a sequel — the two albums boast the same variation on the same cover art, the titles are both taken from old Marx Brothers films and serve as counterpoints to each other.

But even though the two albums look the same, they don’t quite sound the same, A Day at the Races is a bit tighter than its predecessor… its sleek, streamlined finish is the biggest indication that Queen has entered a new phase, where they’re globe-conquering titans instead of underdogs on the make.