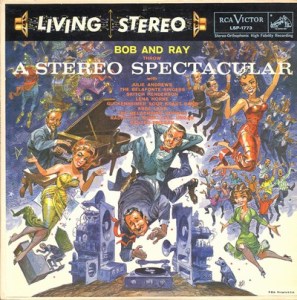 Bob and Ray Throw A Stereo Spectacular just happens to be our favorite Test Disc, eclipsing all others in the areas of naturalness and difficulty of reproduction. Any tweak or new room treatment — we seem to do them almost weekly these days — has to pass one test and one test only: The Bob and Ray Test.

This record has the power to help you get to the next level in audio like no other. Six words hold the key to better sound: “The Song of the Volga Boatman.”

For the purpose of mounting new carts, our favorite track is “The Song of the Volga Boatman” on Bob and Ray Throw A Stereo Spectacular (LSP 1773). It’s by far the most difficult track we know of to get to sound right.

There are about twenty places in the music that we use as tests, and the right setting is the one that gets the most of them to sound their best. With every change, some of the twenty will sound better and some will sound worse. Recognizing when the sound is the biggest, clearest, and most balanced from top to bottom is a skill that has taken me twenty years to acquire.

All our room treatments and tweaks must pass The Bob and Ray Test, as well. It’s the one record we have relied on more than any other over the course of the last several years.

Presenting as it does a huge studio full of brass players, no record we know of is more dynamic or more natural sounding — when the system is working right. When it’s not working right, the first thirty seconds is all it takes to show you the trouble you are in.

If you don’t have a record like that in your collection, you need to find one. It will be invaluable to you in the long run.

The copy we have is so good, and is so important to our operation here, that it would not be for sale at any (well, almost any) price.

This vintage RCA Victor Living Stereo pressing has the kind of Tubey Magical Midrange that modern records can barely BEGIN to reproduce. Folks, that sound is gone and it sure isn’t showing signs of coming back. If you love hearing INTO a recording, actually being able to “see” the performers, and feeling as if you are sitting in the studio with the band, this is the record for you. It’s what vintage all analog recordings are known for — this sound.

One of the key tests on Bob and Ray that keeps us on the straight and narrow is the duet between the trombone and the trumpet about half way through “The Song of the Volga Boatman.” I have never heard a small speaker reproduce a trombone properly, and when tweaking the system, when the trombone has more of the heft and solidity of the real instrument, that is a tweak we want to pursue. The trumpet interweaving with it in the right rear corner of the studio tests the transients and high frequency harmonics in the same section. With any change to the stereo, both of those instruments are going to sound better. For a change to be positive they must both sound better.

What to Listen For (Side One)

That first crack of thunder on side one is an obvious test for bottom end size and weight. On the better copies it really rattles the room.

But the real test for side one is “Buck Dance.” For the Hall of Fame copy we wrote:

Without a doubt this is the best sound I have ever heard for side one of this album. The sound here is so amazing I’m willing to go out on a limb and make the following recklessly bold statement. “Buck Dance” on this pressing has the most extended, natural and harmonically correct high frequencies I have ever heard from my speakers (or anyone else’s for that matter).And the crazy thing about it is, when played against an actual original pressing of Music for Bang, Baa-room and Harp, this copy, which one would assume is made from a dub, SOUNDS FAR BETTER. Now of course we don’t have ten copies of LSP 1866, which would allow us to find one with an even better “Buck Dance” than the one heard here on Bob and Ray, which means we cannot be definitive in any way about the disparity in sound between the two albums.

We can only judge the records we have in hand, not the ones we might have heard years ago or — even worse — speculate about the sound of records we have not actually played, recently or otherwise. So we will stick to the facts, and the facts of this side one are that it is ABSOLUTELY AMAZING sounding.

The album is comprised of a group of selections taken from the best of the early Living Stereo releases, some of which obviously sound better than others, all interspersed with hilarious dialogue and sound effects by Bob and Ray. From start to finish this record is a blast. The entertainment value is off the scale.

Harry Pearson put this record on his TAS List of Super Discs. When you hear a copy sound as good as this one does you will have no doubt that it belongs there. (Other records on the list, not so much. Played Summer Side of Life or Warm Shade of Ivory lately? These aren’t even good records, let alone Super Discs.)

We all owe HP a huge debt of gratitude for turning us on to this wonderful record, which also happens to be my favorite LSP of all time. I might not have ever played it were it not for the TAS List. (That’s actually a bit disingenuous; any classic Living Stereo gets played around here because the potential for good sound — and therefore a sizable return on investment — is fairly high.)

This album ranks fairly high on our Difficulty of Reproduction Scale. Do not attempt to play it using anything but the highest quality equipment.

Bob & Ray’s first album for RCA Victor, Bob & Ray Throw a Stereo Spectacular, is actually a sampler record for the label’s Living Stereo line with a handful of comedy bits appearing between cuts from other albums in the series. Bob & Ray’s portion depicts their visit to the castle of Dr. Ahkbar, a mad scientist (voiced by Bob Elliot) whose bizarre experiments give the comedians an excuse to fool around with stereo sound effects. Listening with headphones is advantageous, but most of the humor holds up independently of the stereo effects. The one exception is “Bob and Ray in the Laboratory,” which consists of practically nothing but sound effects. The music ranges from the orchestral instrumental pop of George Melachrino, the Sauter-Finegan Orchestra, and Skitch Henderson to vocal performances by Abbe Lane and Julie Andrews. Richard Leiber plays “The First Noel” on the pipe organ, Lena Horne performs the suggestive “New-Fangled Tango” live in concert, and Harry Belafonte’s Belafonte Singers contribute the folk song “The Ox Drivers.” The gleefully cacophonous Guckenheimer Sour Kraut Band takes the prize for providing the most unusual musical selection, but the overall program is extremely diverse. Whether Living Stereo collectors want to hear Bob & Ray — or Bob & Ray fans want to hear a Living Stereo sampler — is another matter, but the comedy and music are enjoyable.