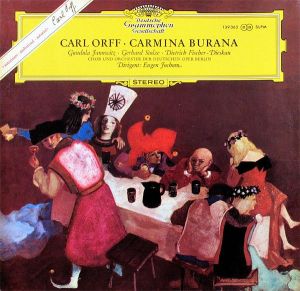 Number one: Too many instruments and voices jammed into too little space in the upper midrange. When the tonality is shifted-up, even slightly, or there is too much compression, there will be too many elements vying for space in the upper part of the midrange, causing congestion and a loss of clarity.

With the more solid sounding copies, the lower mids are full and rich. Above them, the next “level up” so to speak, there’s plenty of space in which to fit all the instruments and voices comfortably, without piling them on top of one another as so often happens on the records we play. On the better copies the upper midrange space does not get overloaded and overwhelmed with musical information.

Number Two: edgy vocals, which is related to Number One above. Many copies will reveal some edge on the vocals, but the best copies keep the edge well under control or do away with entirely, without sounding compressed, dark, dull or smeary.

(As an aside, those last four adjectives you see above would describe more than 95 percent of the Heavy Vinyl pressings we have had the misfortune to audition over the last twenty years or so. How so-called audiophiles can tolerate the blatantly obvious shortcomings found on these modern records is beyond us? We cannot understand it, and we likely never will.)

The highest quality equipment will play the loudest and most difficult-to-reproduce passages of this amazing recording with virtually no edge, grit or grain, even at very loud levels.

What We’re Listening For On Carmina Burana

If you need to get motivated to get up and move, raise your spirits, or just get your foot to tapping, this is the recording for you. Once you start to listen to this opera you can understand why an excerpt from “Fortuna Imperatrix Mundi” is played at some sporting events to get the team and crowd into the game.

With the direction of Eugen Jochum and the bonus of the incomparable rich, powerful voice of baritone Dietrich Fischer-Dieskau, this 1968 performance is a classic, and very probably the best, recording of the opera. The reproduction quality from the original Deutsche Grammophon recording is clear and clean.

Is ‘Carmina Burana’ the ‘Bohemian Rhapsody’ of the classical world?

With haunting medieval chants set to a spine-tingling composition, Carl Orff’s evocative work is one of the most, if not the most, instantly recognizable pieces in all of music history,…

Orff’s musical spectacle, which premiered in Frankfurt in 1937, is based on 24 of the 254 secular poems and dramatic texts from the “Codex Buranus,” a medieval manuscript that, according to legend, is the work of goliards – wandering scholars and clerics in 12th- and 13th-century Europe known for their unruly behavior. The bound, handwritten pages of the anthology were discovered in a German monastery in the early 1800s, and the poems, although predominantly written in Latin, include a few insertions of Middle High German and traces of Old French.

“The words paint this picture that we’re all just stuck on this big wheel of life,” Weber said, “and life’s good fortunes or bad fortunes zap us almost without rhyme or reason.”
Reminiscent of this continuously rotating wheel of fortune is a repeated movement titled “Fortuna Imperatrix Mundi,” which bookends the work. Latin for “Fortune, Empress of the World,” the song, which is frequently heard in films and on television, begins with the famed “O Fortuna,” a grim objection to the unfairness of inexorable fate and life’s misfortunes.

The remaining three sections relate to the pleasures of spring, drinking, gluttony, gambling, lust and love, and the often-satirical text evokes uninhibited, bawdy and irreverent imagery of such controversial and fickle subject matter.

“You can read the words on a very sanitized level, but if you’re perceptive, you’ll see that what those medieval poets were writing was very R- to X-rated, and Orff certainly highlights that in his music,” Weber said. “I’m sure it was extremely scandalous. It’s scandalous today.”

Much of the lyric poetry is highly sensual. For instance, toward the end of the work, the soprano sings a short aria, in which she reaches the highest level of her vocal range. It is a climactic moment, or in this case, a musical depiction of a female orgasm.

At other times, the content of “Carmina Burana,” meaning “Songs of Beuren,” seems completely unrelated, such as when the tenor depicts a dying swan being roasted on a spit. Still, Weber explains, this particular aria is one that people wait with bated breath to hear.

No matter how shocking the colorful subject matter may seem, Orff certainly created a perennial favorite in his rhythmic scenic cantata, one that pleases audiences around the world.

“People love to sing this. People love to hear this,” Weber said. “It’s just indescribable why it’s so popular, but it most certainly is…”

Having critically auditioned a pile of Carmina Burana pressings, it’s abundantly clear to us that our stereo system just plain loves this record. Let’s talk about why we think that might be.

To take an obvious example, playing the average dry and grainy Joe Walsh record on our system is a fairly unpleasant experience. Some added warmth and richness, with maybe some upper-midrange suckout thrown in for good measure, would make the experience of playing copy after copy much more enjoyable. But then how would we know which Joe Walsh pressings aren’t too dry and grainy for our customers to enjoy listening to?