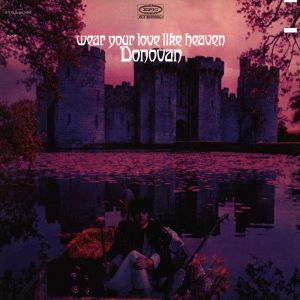 This vintage Epic stereo pressing has the kind of Tubey Magical Midrange that modern records rarely even BEGIN to reproduce. Folks, that sound is gone and it sure isn’t showing signs of coming back. If you love hearing INTO a recording, actually being able to “see” the performers, and feeling as if you are sitting in the studio with the band, this is the record for you. It’s what vintage all analog recordings are known for — this sound.

What We’re Listening For On Wear Your Love Like Heaven

Separately released in the U.S. as the pop record from 1967’s double-LP A Gift From a Flower to a Garden, Wear Your Love Like Heaven stands on its own as one of the brightest, most pleasant works Donovan ever recorded. The title track and “Oh Gosh” were the only nods to the charts (and, tellingly, the only songs produced by Mickie Most). For once in Donovan’s career, the remainders far outshone the singles, with brisk, breezy productions and the thoughtful playing of an actual band behind Donovan — usually just bass, keyboards, and soft, whisking drums or bongos.

Donovan’s voice is better than ever, playful and unassuming on romps like “Mad John’s Escape,” “Skip-A-Long Sam,” and “Oh Gosh,” while expressive and controlled for the slower material. He also makes evocative folkie nostalgia work much better than it should on “Sun” and “Little Boy in Corduroy,” helped by the breathy flute playing of Harold McNair.