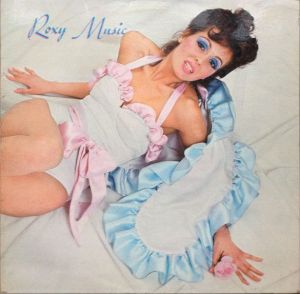 The guitar solo at the end of “Ladytron” rocks like you will not believe.

In both music and sound, this is arguably the best record the band ever made. Siren, Avalon and Country Life are all musically sublime, but the first album has the kind of dynamic, energetic, POWERFUL sound that their other records simply fail to show us. And we’ve played them by the dozens, so there’s a pretty good chance we will never find copies with the abundant richness and power we find here.

AMG calls Roxy Music the “most adventurous rock band of the early ’70s” and I’m inclined to agree with them. Roxy is certainly one of the most influential and important bands in my growth as a listener and audiophile, along with the likes of Supertramp, Ambrosia, 10cc, Steely Dan, Yes, Bowie and others, groups of musicians dedicated to exploring and exploding the conventions of popular music.

With all the latest technological advances in playback, I can tell you that this record sounds a whole lot better than I ever thought it could. What an amazing recording. I had always assumed it was Chris Thomas, who produced it, since he had produced the rest of their albums (and engineered The Beatles and Badfinger and mixed Dark Side of the Moon and on and on), but the production duties fell to Peter Sinfield (King Crimson), using an engineer I have been unable to find out much about, Andy Hendriksen.

I thought Chris Thomas was behind the superb sound because the album has many of his trademark qualities: an enormous, 3-Dimensional soundstage; tons of bass; tremendous dynamics; and energy to rival anything around. The engineering is superb in all respects and practically faultless. It’s just not Chris Thomas’s.

What We’re Listening For On Roxy Music’s Debut

This is some of the best High-Production-Value rock music of the ’60s and ’70s. The amount of effort that went into the recording of this album is comparable to that expended by the engineers and producers of bands like Supertramp, The Who, Jethro Tull, Ambrosia, Pink Floyd and far too many others to list. It seems that no effort or cost was spared in making the home listening experience as compelling as the recording technology of the day permitted.

Roxy Music’s debut is Masterpiece, a recording that should be part of any serious Rock Collection.

The guitar solo at the end of Ladytron rocks like you will not believe.

If There Is Something
2 H.B.

Although no musician demonstrates much technical skill at this point, they are driven by boundless imagination — Brian Eno’s synthesized “treatments” exploit electronic instruments as electronics, instead of trying to shoehorn them into conventional acoustic patterns.

Similarly, Bryan Ferry finds that his vampiric croon is at its most effective when it twists conventional melodies, Phil Manzanera’s guitar is terse and unpredictable, while Andy Mackay’s saxophone subverts rock & roll clichés by alternating R&B honking with atonal flourishes.

But what makes Roxy Music such a confident, astonishing debut is how these primitive avant-garde tendencies are married to full-fledged songs, whether it’s the free-form, structure-bending “Remake/Remodel” or the sleek glam of “Virginia Plain,” the debut single added to later editions of the album. That was the trick that elevated Roxy Music from an art school project to the most adventurous rock band of the early ’70s.

The Evolution of an Audiophile

AMG calls Roxy Music the “most adventurous rock band of the early ’70s” and I’m inclined to agree with them. Roxy are certainly one of the most influential and important bands in my growth as a music lover and audiophile, along with the likes of Supertramp, Ambrosia, 10cc, Steely Dan, Yes, Bowie and others, musicians and bands who seemed to me dedicated to exploring and exploding the conventions of popular music.

My equipment was forced to evolve in order to be able to play the scores of challenging recordings issued by these groups in the ’70s. You could say that the albums of Roxy Music and others informed not only my taste in music but the actual stereo I play that music on. I’ve had large scale dynamic speakers for the last four decades, precisely in order to play records like this, containing the kind of music I fell in love with all those years ago.