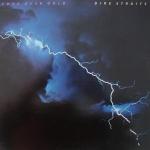 Listen to how hard Allan Clark bangs on the piano on side one — he’s pounding that piano with all his might. No other copy managed to get the piano to pop the way it does here, clear and solid.

Wow, who knew? Maybe this is the reason HP put the record on the TAS Super Disc List. (I rather doubt he’s ever heard a copy this good, but who’s to say?)

The snare drum on Industrial Disease. Play five copies of the album and listen for how much snap there is to the snare on each of them. It will be obvious which ones get the transient attack right and which ones don’t. (If none of them do try five more copies!)

One Way To Know

We pick up every clean copy we see of this album, domestic or import, because we know from experience just how good the best pressings can sound. What do the best copies have? REAL dynamics for one. And with those dynamics you need rock solid bass. Otherwise the loud portions simply become irritating. A lack of grain is always nice — many of the pressings we played were gritty or grainy. Other copies that were quite good in most ways lacked immediacy and we took serious points off for that.

Modern records are just so damn opaque. We can’t stand that sound. It drives us crazy. Important musical information — the kind we hear on even second-rate regular pressings — is simply nowhere to be found.

That audiophiles as a group — including those that pass themselves off as champions of analog in the audio press — do not notice these failings does not speak well for either their equipment or their critical listening skills.

Once you hear this Hot Stamper pressing, those 180 gram records you own may never sound right to you again. They sure don’t sound right to us, but we are in the enviable position of being able to play the best properly-cleaned older pressings (reissues included) side by side with the newer ones.

This allows the faults of the current reissues to become much more recognizable, to the point of actually being quite obvious. When you can hear the different pressings that way, head to head, there really is no comparison.

This record sounds best to us this way: