Album Reviews of the Music of Claude Debussy 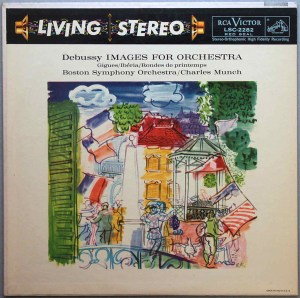 What We’re Listening For On Images For Orchestra

The three works which collectively form Claude Debussy’s Images for orchestra, not to be confused with the two sets of piano works that go by the same title, are among the more immediately accessible and directly expressive of his later pieces. Although intended to be performed in succession, the Images are frequently heard independently of one another, especially the second, “Iberia,” which remains among the composer’s most frequently played orchestral works. The three works, which continue to be published as separate titles, were initially released at different times, with the first being composed and published several years after the second and third.

“Gigues” was written from 1909-1912, and has a decidedly English flavor. Debussy quotes the English folk tune “The Keel Row” throughout as the tune ebbs and swirls in the colored orchestral texture, surfacing in one instrument, fading back into the texture, and then resurfacing on another instrument. Debussy makes striking use of the oboe d’amore in the opening “Gigues”—indeed, it can be said that this unique instrument constitutes more of a musical “theme” than does any actual melody. A plaintive tone predominates; the few hints of joyfulness are clearly the product of wistful fantasy.

The central “Iberia” (1905-1908), itself divided into three movements, is more outgoing in nature (as French representations of Spanish music and culture almost invariably seem to be). The celebratory yet undeniably aristocratic atmosphere of “Iberia” owes a great deal to the earlier Fêtes from the Nocturnes, which rides the same fine line between the vernacular and the high-minded. Debussy’s score even calls for guitars and castanets, a remarkable request at that time. There is a decadent flavor to “Parfums de la nuit,” whose nocturnal activities form the center of the piece dawn arrives with the feeling that nothing has actually happened.