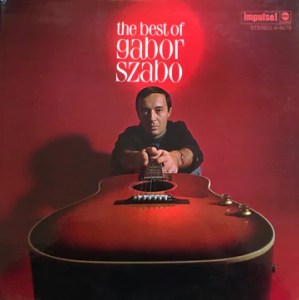 This vintage Impulse-ABC pressing has the kind of Tubey Magical Midrange that modern records can barely BEGIN to reproduce. Folks, that sound is gone and it sure isn’t showing signs of coming back. If you love hearing INTO a recording, actually being able to “see” the performers, and feeling as if you are sitting in the studio with the band, this is the record for you. It’s what vintage all analog recordings are known for — this sound.

What We’re Listening For The Best of Gabor Szabo

He began playing guitar at the age of 14. In the aftermath of the Hungarian revolution of 1956, he moved to California and later attended the Berklee College of Music in Boston between 1958 and 1960.

In 1961, Szabó became member of a quintet that was led by Chico Hamilton and included Charles Lloyd, playing what has been described as chamber jazz, with “a moderate avant-gardism.” Szabó was influenced by the rock music of the 1960s, particularly the use of feedback. In 1965 he was in a jazz pop group led by Gary McFarland, then worked again with Lloyd in an energetic quartet with Ron Carter and Tony Williams. The song “Gypsy Queen” from Szabó’s debut solo album Spellbinder became a hit for rock guitarist Carlos Santana. During the late 1960s, Szabó worked in a group with guitarist Jimmy Stewart. He started the label Skye Records with McFarland and Cal Tjader.

Szabó continued to be drawn to more popular, commercial music in the 1970s. He performed often in California, combining elements of Gypsy and Indian music with jazz. He returned often to his home country of Hungary to perform, and it was there that he died just short of his 46th birthday.