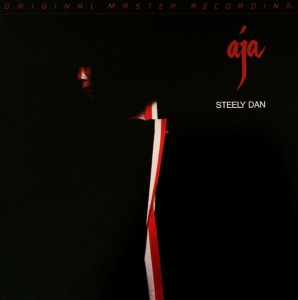 Folks, there’s not much I can tell you about this copy of Aja that’s going to make you want this record, other than to say this: If you’re in the market for a superb pressing of what’s gotta be the most beloved Steely Dan record they made, look no further. It’s right here.

Generally what you try to get on side one is a copy with ambience, because most copies are flat, lifeless and dry as a bone. You want a copy with good punchy bass — many are lean, and the first two tracks simply don’t work at all without good bass. And then you want a copy that has a natural top end, where the cymbals ring sweetly and Wayne Shorter’s saxophone isn’t hard or honky or dull, which it often is on the bad domestic copies.

If you play Peg against the tracks that follow it on side two most of the time the highs come back. On the best of the best, the highs are there all the way through.

What We’re Listening For on Aja

Aja is a recording that should be part of any serious Popular Music Collection.

Fagen’s voice on the first line will always sound grainy – it’s that way on the CD and every LP I have ever played, which means it’s on the tape that way. It will quickly pass, and the rest of the vocals will sound amazing if you have a Hot Stamper Copy.

This song is as BIG and BOLD sounding as any pop song I know. This is Demo Disc material if you have the system to do it justice.

And don’t you just love the way it starts on the upbeat? Now that’s the way to kick off an album!

Got a big speaker? Lots of power? You will need both to play this song right. Note how the percussion comes through the dense mix, without being abrasive in any way. That’s a sure sign that you have a copy with the transparency and resolution you need to bring out the track’s best qualities. The mix needs that percussion; it’s there for a reason. You, dear audiophile, need an LP that lets that percussion be heard. Many are called; few are chosen.

For some mysterious reason side two is almost always cut at a lower level than side one. Pump up the volume a db or two in order to get the full Aja effect for the songs on this side.

Oddly enough one of the best ways to hear this song is on the — gulp! — MOFI. It’s got a lot more top end along with whatever else they boosted the shit out of when they cut the record, and on this track their crazy EQ works. I admit it! Their version has plenty of problems, but it beats the hell out of nine out of ten woefully dull domestic pressings.

The best copies get you the highs you need to make Michael McDonald’s background vocals float above the mix and expand out to the edges of the soundfield. Only the best of the best can get the top end of Peg right. (It was recorded at a different studio, which might explain why its EQ never quite fits in with the rest of the side.)

The toughest song on side two bar none. Nine out of ten copies have grainy, irritating vocals and the deep bass is often missing too. Very unpleasant as a rule, which is why it’s such a great test track. Get this one right and it’s pretty much smooth sailing from here on out.

If you own the 180 gram Cisco pressing, focus on Vic Feldman’s piano at the beginning of the song. It lacks body, weight and ambience on the remastered pressing, but any Hot Stamper will show you a piano with those qualities in spades throughout the track. It’s some of my favorite work by the Steely Dan vibesman.

The thin piano on the Cisco release must be recognized for what it is: a major error in judgment by the mastering engineers.

I Got the News

The instrumental break in the middle, with that wonderful solo followed by Michael McDonald’s vocals, is audio NIRVANA on the Super Hot Stamper copies. The sound will positively sweep you off your feet (or knock you out of your chair, as the case may be).

Note that the soundstage stretches from wall to wall, yet the guitar manages to stay focused clearly and sweetly right between the speakers, gently resting on a bed of cool studio air. Steely Dan Hi-Fidelity Sound at its best.

Interestingly this is some of the best sound on side two, which means that Josie can sound good on even otherwise mediocre copies.

The key to Josie is bass. If it’s full and punchy, not smeared or wooly, you probably have a winner, assuming the mids and highs are right. But check for the bass first, this song really needs it. The bass drives the song. If it ain’t right, the song just doesn’t work.

Steely Dan hadn’t been a real working band since Pretzel Logic, but with Aja, Walter Becker and Donald Fagen’s obsession with sonic detail and fascination with composition reached new heights. A coolly textured and immaculately produced collection of sophisticated jazz-rock, Aja has none of the overt cynicism or self-consciously challenging music that distinguished previous Steely Dan records. Instead, it’s a measured and textured album, filled with subtle melodies and accomplished, jazzy solos that blend easily into the lush instrumental backdrops. It’s complex music delivered with ease, and although the duo’s preoccupation with clean sound and self-consciously sophisticated arrangements would eventually lead to a dead end, Aja is a shining example of jazz-rock at its finest.

The dead end they refer to above has to be the post-Gaucho catalog, because Gaucho is not a dead end in any way, shape or form. Its unique brilliance should be obvious to any Steely Dan fan. Everything after Gaucho is practically inexcusable. From an audiophile perspective, the super-clean, compressed, music-for-robots digital sound of the later albums is truly inexcusable, the deadest dead end imaginable.