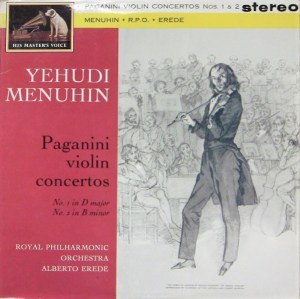 Another remarkable Demo Disc from the Golden Age of Vacuum Tube Recording Technology, in this case 1961, with the added benefit of mastering using the more modern cutting equipment of the ’70s. (We are of course here referring to the good modern mastering of 40 years ago, not the bad modern mastering of today.)

This combination of old and new works wonders on this title as you will surely hear for yourself on this wonderful copy.

The sound of the best copies is transparent, undistorted, three-dimensional and REAL, without any sacrifice in solidity, richness or Tubey Magic. The illusion of disappearing speakers is one of the more attractive aspects of the sound here, pulling the listener into the space of the concert hall in an especially engrossing way.

Here is the kind of Tubey Magical Midrange that modern records can barely BEGIN to reproduce. Folks, that sound is gone and it sure isn’t showing signs of coming back. If you love hearing INTO a recording, actually being able to “see” the performers, and feeling as if you are sitting in the studio with the band, this is the record for you. It’s what vintage all analog recordings are known for — this sound.

Paganini’s impact on nineteenth century music cannot be overestimated: he set an entirely new standard of technical virtuosity; he was among the first musicians to champion the music of Berlioz (having commissioned, but never performed, Harold in Italy); and the inspirational effect that his works would have on the young Franz Liszt — who set out to duplicate Paganini’s achievements on the piano — would alter both the course of music and the life of the young Liszt forever.

Concerto No. 1 in D Major for Violin and Orchestra, Op. 6

Some may prefer Rabin’s more exciting interpretation of the first concerto that we offer on Angel; I don’t deny that he plays the hell out of the piece. Certainly both performances have much to offer. This record differs from the Angel in that it contains both of Paganini’s most famous concertos for the violin, a big plus to be sure.

Concerto No. 2 in B Minor for Violin and Orchestra, Op.7

Description by Edward Moore Paganini’s Concerto for Violin and Orchestra No. 1 is a virtuosic tour de force and reveals not only Paganini’s incredible technical ability, but also his melodic sensitivity and skillful exploitation of dramatic structure.

Like many of his other works, this concerto takes inspiration from the musical language of Gioachino Rossini’s operas, which were extremely popular at the time. Paganini originally composed the Concerto No. 1 in the unusual key of E flat major, in order to achieve a more brilliant tone for the violin. However, since modern concert pitches are much higher than was the norm in Paganini’s era, the standard modern version of the piece is transposed to the key of D major, which also makes the very thin E string of the violin less susceptible to breakage (Paganini often broke several strings during a single concert performance).

By modern standards the technical demands of the concerto are only moderate, but in Paganini’s time they were considered tremendous, and many contemporaries branded the piece “unplayable.” This, of course, served as valuable publicity that helped Paganini become the most popular soloist of his day. The work is indeed a catalog of such flashy techniques as extended arpeggios, left-hand pizzicati, rapid runs in thirds, fifths, and even harmonics.

The work is more than a mere virtuoso showpiece, however. Paganini’s concerto is filled with elegant melodic themes, and there are moments of striking beauty. One legend holds that Paganini composed the main theme of the second movement on a one-string violin while languishing in prison under suspicion of a murder he did not commit. Such legends grow up naturally around the dynamic (and, some said, demonic) Paganini, but they also reflect the appeal and mystique of his music.

Paganini’s aura of mystery was amplified by his refusal to allow his works to be published during his lifetime, making it impossible for his rivals to study and master his techniques. The Concerto No. 1 was published only after his death, and it soon became a fixture in the repertoire of lesser virtuosos who were as adept, more or less, in the technical department, but not nearly as musically compelling as Paganini. Fortunately, many great twentieth century soloists have concentrated on the musicality of the piece as much as the virtuosity.

Paganini composed his second violin concerto about eight years after the first, when his fame as a virtuoso soloist had been fully established. It is perhaps for this reason that the Concerto for Violin and Orchestra No. 2, in B minor, Opus 7 — subtitled “La Campanella” (“The Bell,” after the persistent use of a triangle in the famous theme of the final movement) — focuses more on pure melodic content and thematic development than virtuoso flourish.
Indeed, in this piece, perhaps more than any other, we see Paganini’s virtues as a composer shining forth. Of course there are technical displays, but the focus is on the unity of the concerto and its effect as a dramatic, indeed operatic, piece of music.

Paganini had an immense fondness for Italian opera, especially the music of Rossini (who in turn rejoiced that Paganini had not become an opera composer). Rossini’s influence is especially marked in the opening movement of the Concerto No. 2, which bears a remarkable resemblance to the overture to Rossini’s Barber of Seville.

However, the rondo theme of the final movement is its most interesting feature. This brilliant theme has a marked gypsy feel, and is a fine example of pure virtuosity harnessed to the service of a grand musical idea. The theme was used by pianist-composer Franz Liszt in his influential Études d’exécution transcendante d’après Paganini.

The overall structure of the Concerto for Violin and Orchestra No. 2 is very precise, with each theme either presaging or echoing another, and echoes of the work resound in many later concertos of the Romantic era.