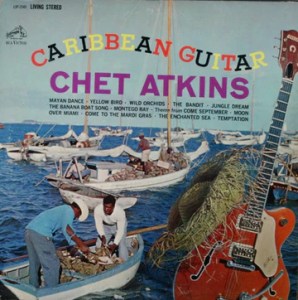 This is one of Chet Atkins’ best albums. Sonically, it’s right up there with The Other Chet Atkins and the Hollywood album. It seems like Bill Porter just doesn’t know how not to make an amazing sounding Living Stereo recording. He knocked this out of the park.

I suppose we owe a debt of gratitude to Harry Pearson for pointing out to us with his TAS List what a great record this is, although I’m pretty sure anybody playing this album can tell after a minute or two that it’s in that very special class of great recordings.

The last track on side 2 where Chet is joined by a trumpet player is my favorite on the album. That guitar-trumpet combination is pretty magical on that song. And you’ve got to love the kind of sound Bill Porter gets from a trumpet. That’s the kind of sound we audiophiles drool over. I do anyway.

This vintage RCA Living Stereo pressing has the kind of Tubey Magical Midrange that modern records can barely BEGIN to reproduce. Folks, that sound is gone and it sure isn’t showing signs of coming back. If you love hearing INTO a recording, actually being able to “see” the performers, and feeling as if you are sitting in the studio with the band, this is the record for you. It’s what vintage all analog recordings are known for — this sound.

What We’re Listening For On Caribbean Guitar