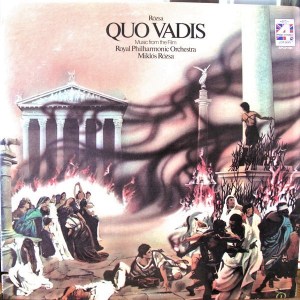 This vintage London Phase 4 pressing has the kind of Tubey Magical Midrange that modern records can barely BEGIN to reproduce. Folks, that sound is gone and it sure isn’t showing signs of coming back. If you love hearing INTO a recording, actually being able to “see” the performers, and feeling as if you are sitting in the studio with the band, this is the record for you. It’s what vintage all analog recordings are known for — this sound.

What We’re Listening For On Quo Vadis

Miklós Rózsa’s music for the 1951 movie Quo Vadis is one of his most elusive major scores. It was among the earliest of his MGM scores to be released as a commercially available soundtrack LP — a 10″ album on MGM Records, around the time of the movie’s release — but the master to that album was apparently destroyed in a studio fire, which explains why it was never reissued on any subsequent 12″ vinyl compilations of the composer’s early soundtracks. And unlike his later music for Ben-Hur, which took on something of a life of its own, the score for Quo Vadis never quite lingered in the music catalogs of subsequent decades — perhaps because the movie itself, although successful, was no Ben-Hur; the latter played off around the world for years after its 1959 release, and was a major “event” film when shown on network television, even as late as the early ’70s, a status that Quo Vadis never enjoyed.

But in 1978, Decca/London released a pair of Rózsa re-recordings of his own work, of his music from Ben-Hur and his score for Quo Vadis, the former with the National Philharmonic Orchestra and the latter with the Royal Philharmonic. This isn’t the complete music from Quo Vadis, but the 40 minutes on this album does represent the dozen major cues from the movie, and in glittering stereo sound. Rózsa gets spirited performances out of the orchestra and the chorus, but with the latter he also achieves a level of subtlety in their performance of his work which greatly enhances the finale to the piece. Elsewhere, the orchestra generates blood and thunder everywhere required of it — one of the reasons for the popularity of Rózsa’s religious film scores is that they’re about as exciting as they are uplifting, and as the conductor here he guides the orchestra to a peak of drama in the playing.