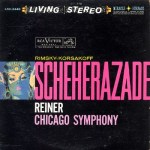 Advice on What to Listen For on Classical Records

The Classic reissue of LSC 2446 is a disaster for many reasons, but it does have one specific failing that is easy to recognize and worth further discussion and analysis.

As I noted for some of the Classic Heifetz titles a while back, for all I know the CDs for his Living Stereo recordings may have better sound. That’s probably the first place to go, considering Classic’s rather poor track record regarding the remastering of his music.

Case in point: The Living Stereo CD I own (both the CD and the SACD) of Scheherazade is dramatically better than the awful Classic Records pressing of it.

Audiophiles who don’t notice what is wrong with the Classic pressing need to get hold of a nice RCA White Dog pressing to see just how poorly the Classic stacks up. (They could even find one that’s not so nice and listen through the surface noise. The difference would still be obvious.)

The solo violin in the left channel at the opening of the first movement should be all it takes.

Anyone has ever attended a classical music concert should have no trouble recognizing that the violin on any of the Heavy Vinyl pressings, including the Analogue Productions pressing, is completely wrong and sounds nothing like a violin in a concert hall would ever sound.

And I mean ever.

No matter how good or bad the hall’s acoustics.

The violin on these Heavy Vinyl pressings is dark, it’s veiled, and it’s overly rich, as well as lacking in overtones.

Solo violins in live performance never sound anything like that.

They are clear, clean and present. You have no trouble at all “seeing” them, no matter where you sit.

My best sounding White Dog pressing had that kind of clear and present sound for the violin.

Neither of the Heavy Vinyl reissues I auditioned did.

A pressing of Scheherazade that fails to reproduce the solo violin, the musical voice of the young lady herself, fails utterly and completely, no matter how big, rich and powerful the opening brass may be.

If you think your Heavy Vinyl pressings are doing justice to the sound of classical music, please attend a live concert as soon as possible in order to disabuse yourself of that notion.

Once you hear how unfaithful your classical records are to the sound of the live performance, you can begin to collect records of higher fidelity.

Would Adjusting the VTA for the Heavier Weight Vinyl Fix the Problem?

Adjusting for all these elements involve tradeoffs. When all the elements sound close to their best, and none of them are “wrong,” the VTA is pretty much right.

And that solo violin will not be much better. It is what it is, it sounds the way it sounds, because the mastering engineer got it wrong. You cannot fix bad mastering by changing the VTA.

Tea for the Tillerman?

Back in the ’80s, when I first got into the audiophile record business, I had a customer tell me how much he liked the UHQR of Tea for the Tillerman. This was a record I was selling sealed for $25. And you could buy as many as you liked at that price! I was paying $9 for them and could order them by the hundreds if I’d wanted to. (Yes, I admit I had no shame.)

I replied to this fellow that “the MoFi is awfully bright, don’t you think?”

“Oh no, you just adjust your VTA until the sound is tonally correct.”

At the time I could not adjust my VTA, so I filed that bit of information away for a later time.

When I finally did get a tonearm with adjustable VTA, I quickly learned that trying to correct the tonality of a record with VTA adjustments was a fool’s game.

The tonality might be better, but the bass would get wonky and weird, the deepest notes would disappear or become boosted, the highs would sound artificial, various elements of the recording would randomly become louder and softer, wreaking havoc with the balance of the mix, and on and on.

In other words, fixing one thing would cause lots of other things to go wrong.

This fellow couldn’t hear it, and like a lot of audiophiles writing about records these days, he simply did not have the critical listening skills to notice all the problems he was creating with his “fix.”

My skills were pretty poor back then too. I have worked very hard for the last 30 years or so to improve them. I did it by experimenting on records, and experimenting with VTA adjustments has taught me a lot.

It showed me that I could get dramatically better sound by playing with the VTA for ten or twenty minutes until I found the ideal setting.

It also taught me that trying to fix a mastering problem by adjusting the VTA will only work if you haven’t developed much in the way of critical listing skills.

Comparing the way the violin sounds on various pressings of Scheherazade will help you to develop these skills, as long as you know what this music should sound like in performance. You need both, and doing one without the other won’t get you very far. I spent my first twenty years in audio “in the wilderness,” so to speak, so I believe I am on solid ground with this advice.

In these four words we can describe the sound of the average Classic Records Living Stereo pressing.