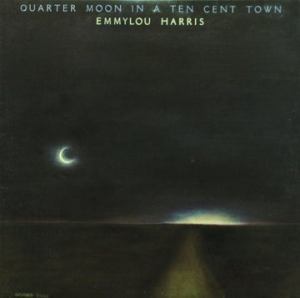 The sound that Emmylou and her producers were going for here is clean, detailed and low distortion, which is exactly what the best pressings like this one deliver! What really sets the good copies apart, though, is the natural, relaxed quality of the vocals. Emmylou sounds like a real person, with none of the harsh, sterile sound that ruins so many pressings. Check out the duet with Willie Nelson on “One Paper Kid” — both vocalists sound wonderful. That’s the sound you want.

Quarter Moon in a Ten Cent Town is a transitional effort that bridges the curveballs of Emmylou Harris’ earliest solo work with the more traditional country albums that comprise the bulk of the second phase of her career. For the first time, she covers no Gram Parsons tunes or pop music chestnuts, relying instead on newly exited Hot Band member Rodney Crowell for two songs (“Leaving Louisiana in the Broad Daylight” and “I Ain’t Living Long Like This”) and Dolly Parton for another (the devastating “To Daddy”); the highlight is a gorgeous cover of Jesse Winchester’s “Defying Gravity.”