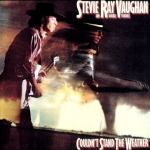 A customer wrote us about his experience with Stevie Ray a while back.

Here is the bulk of his letter:

I took another listen to SRV Couldn’t Stand the Weather, this time at VOLUME.

I wanted bring make a point about one of his observations. (Bolding and italics added.)

There seems to be a threshold level for this record at which it sounds congested below, but which it comes alive above (and how).

I also noticed that my previous observations about the ratings of sides A and B were reversed at this volume level; there is more bass on side A, which was resulting in it sounding more congested at lower levels, but which is delicious when played loud; side B sounds a bit thin at louder volumes comparatively.

I guess this is more in line with what you heard when reviewing.

You hit the nail on the head with your revision of the sound of the two sides at loud levels.

We don’t know what our rock and electric blues and even classical records sound like at moderate levels.

We don’t play them that way, and we don’t want to hear them that way. Playing records too quietly obscures their faults. It also reduces the energy, whatever dynamic contrasts they might have, the ability to play clean in the loudest climaxes or choruses, and on and on down the list.

If someone were to invite me to hear their system, my first question would be “do you play your records at loud volumes?”

If the answer were no, I would stay home. What is more frustrating then music that won’t come alive?

Have you ever been in an audio showroom where they refused to play the system at anything but moderate levels? Of course you have. They never turn it up very loud because they know their systems will fall apart at loud levels. (The rooms are at fault for a lot of the bad sound. Good room treatments are ugly and potentially will scare away customers.)

Assuming that audiophiles won’t insist on playing these stereos at realistic levels and finding out just how bad they are is a pretty safe bet.

It took me decades to figure out what was going with these audio salons. You couldn’t pay me to go into one now.