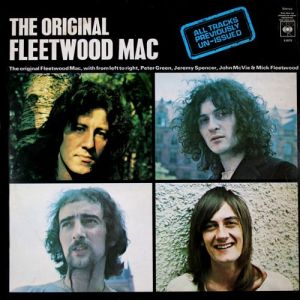 The music on this album was recorded when they were still a blues band — tracks left off their early albums for one reason or another.

As is so often the case with unreleased material, these songs do not have that overproduced, too-many-generations-of-tape sound. This sounds like Fleetwood Mac live in the studio most of the time. In other words, awesome. If the drum sound on the first track isn’t enough to convince you this is an amazing sounding record, I don’t know what would.

These British imports are the only way to go. The domestic copies are definitely made from dub tapes. They can sound good, but they never sound this good!

What We’re Listening For on The Original Fleetwood Mac

As evidenced by the material, this quartet are an unmistakably blues-based combo. Early on they distinguished themselves as not only interpreters of traditional fare, but skilled composers, especially Green, who penned the vast majority of these selections…