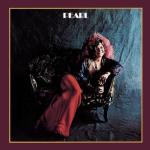 Mobile Fidelity famously attempted to do a version of this album back in the ’80s that (thankfully) never made it past the test pressing phase.

Sells for big money too. Collector Mentality at its worst. And what could be sadder than collecting the awful records of that label? In the ’80s it might have made sense — I used to do it — but at some point we should make some progress in this hobby, and it does not take much audio progress before the shortcomings of the vast majority of those remastered pressings become obvious and intolerable.

There’s a Sony 180 gram reissue from Germany that’s godawful, and the later Columbia versions are a mess as well.

Stick with the early domestic pressings. If you clean and play enough of them, you most likely will find a good one.

We consider this Janis Joplin record her Masterpiece. It’s a recording that should be part of any serious popular Music Collection.

What We’re Listening For on Pearl