Want to Get Better at Audio and Record Collecting?

Think about it: perhaps as many as a third of the Hot Stamper pressings on our website are what would commonly be understood to be the “wrong” pressings — or, worse, records that are not supposed to sound good at all.

Reissues of Dark Side from the wrong country? ’60s and ’70s Living Stereo reissue pressings? Original Jazz Classics from the ’80s? Beatles records reissued in the ’70s, in stereo no less! Can we be serious?

We’ve played all the copies that are supposed to be the best, and we’ve also played the ones that aren’t supposed to be any good — late reissues, or records pressed in the “wrong” country; or cut by the “wrong” mastering engineer; or found on the second, third, or fourth labels, all wrong, don’t you even know that much?! — and against all odds we’ve kept our minds and our ears open.

Whatever pressing sounds the best, sounds the best. Whether it’s the “right” pressing according to orthodox record collecting wisdom carries no weight whatsoever with us, and never will — because that way of thinking doesn’t produce good results.

Please don’t think we’re trying to say we have all the answers. We most certainly do not. We find pressings that beat our old favorites on a regular basis — not every day, but often enough to make trying long shots an important part of our business.

Yes, there was a time when we actually had this many Tea for the Tillerman’s in stock ready to shootout.

Those were the days! 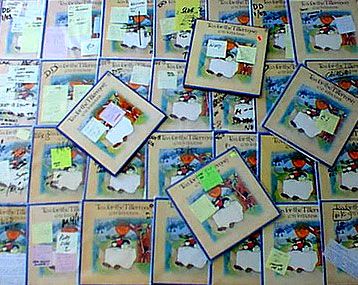