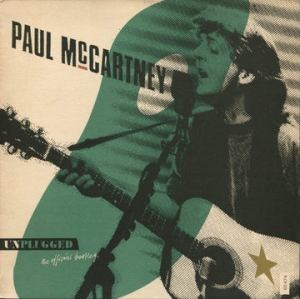 Superb sound for this amazing recording! It’s a strikingly intimate document of a live show, one which just happens to be fronted by one of the greatest performers in the history of popular music, Sir Paul McCartney.

On the best copies, the sound is warmer, richer, and sweeter, or in a word, more ANALOG sounding. You get more extension up top, more weight down low, and more transparency in the midrange. It’s surprising how veiled and two-dimensional so many copies can be, considering that this is a live recording (by the legendary Geoff Emerick himself) with not a lot of “messing around” after the fact.

This vintage Hispavox pressing has the kind of Tubey Magical Midrange that modern records can barely BEGIN to reproduce. Folks, that sound is gone and it sure isn’t showing signs of coming back. If you love hearing INTO a recording, actually being able to “see” the performers, and feeling as if you are sitting in the studio with the band, this is the record for you. It’s what vintage all analog recordings are known for — this sound.

This isn’t your typical rock record that sounds crappy on eight out of ten copies. Most copies of Unplugged sound pretty good. We did hear quite a few that had a somewhat brittle quality to the top end, with no real extension to speak of. It wasn’t ever a dealbreaker, but the copies with a silky openness up there are much more enjoyable — and, unfortunately, fairly uncommon.

There are copies that lack warmth, copies that never fully come to life, and copies that are a bit dark. Some that we auditioned didn’t seem to get the breath in the vocals, and others lacked weight to the piano. Again — not one of the pressings we played sounded BAD, but many of them definitely sounded dry, boring and lifeless.

Just for fun, check out Linda’s percussion and tambourine work in the right channel of the first track on side one, Be-Bop-A-Lula. Since that’s one of our test tracks, we had the opportunity to hear her “contribution” to the song about twenty times or so, and it became a source of — to be charitable — “entertainment” in its own right as the shootout progressed.

What We’re Listening For on Unplugged

This is a Must-Own LP for testing purposes. When Paul’s voice and the guitars sound right it’s pretty obvious that the system is working. Of course, what makes this a great test disc is that when they sound wrong, it’s just as obvious.

A Must Own McCartney Record

McCartney Unplugged is recording that should be part of any serious Popular Music Collection. Others that belong in that category can be found here.

Before this song starts, Paul banters with the audience for a minute or two. He spots a woman in the crowd and jokes with her. If your system is capable of resolving it, you can hear their conversation clearly. The sense of actually being in the room with the audience and the performers is uncanny. All the “messing around” on stage stuff gives the listener plenty of nice ambience cues to listen for.

Also, Paul moves the microphone, scraping it along the floor, which causes a huge wave of bass to envelop the room. I was over at one of my customer’s houses one time, doing a shootout with various electronics and tweaks, and I remember distinctly that the microphone stand was shrunken and lean sounding in a way I had never heard before. Now this customer, whose system was in the $100K range, had no idea what that microphone stand could really do. I did, because I’ve been hearing it do it for years.

Some speakers can’t move enough air down there to reproduce that sound. And some speakers shrink the size of images. These are two things I listen for in a system: if it doesn’t have the bottom end and it doesn’t have correctly sized images for the instruments, that’s a system that is failing in fundamental ways. If you close your eyes, you’re not in the presence of the musicians. That’s the goal, and all the equipment in a system must work to serve that purpose.

That’s why this is a good test disc. The band is RIGHT THERE. To the extent that you can make them sound live in your living room, you are getting the job done. The last tiny bit of resolution is not the point. Full-sized live musicians in your living room is the point. Either Paul and his band are in front of you, or they’re not. When they’re not, it’s time to get to work and find out what part of the system is not doing its job.

… it remains one of the most enjoyable records in McCartney’s catalog. Running through a selection of oldies — not only his own, but Beatles and rock & roll chestnuts — McCartney is carefree and charming, making songs like “Be-Bop-a-Lula” and “Blue Moon of Kentucky” (which finds Paul melding Bill Monroe with Elvis) sound fresh. But the real revelations of the record are the songs McCartney hauls out from his debut — “That Would Be Something,” “Every Night,” and “Junk” — which sound lovely and timeless, restoring them to their proper place in his canon. They help make Unplugged into a thoroughly enjoyable minor gem.