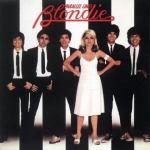 Can this kind of music get any better? This album is a MASTERPIECE of Pure Pop, ranking right up there with The Cars first album. I can’t think of many albums from the era with the perfect blend of writing, production and musicianship Blondie achieved with Parallel Lines.

As expected, if you clean and play enough copies of a standard domestic major label album like this one, sooner or later you will stumble upon The One, and boy did we ever.

This side two had OFF THE CHARTS with presence, breathy vocals, and punchy drums. It was positively swimming in studio ambience, with every instrument occupying its own space in the mix and surrounded by air.

There was not a trace of grain, just the silky sweet highs we’ve come to expect from analog done right.

Gone is the compressed muck of the MOFI (and most domestic pressings, to be fair). In its place is the kind of clarity, transparency and pure ROCK AND ROLL POWER previous pressings only hinted at. I became a giant fan of this album the moment I heard it back in 1978, but the sound always left much to be desired.

So many copies were thick and compressed; the music was cookin’ but the sound seemed to be holding it back.

But there are good sounding pressings, and we know which ones they are.