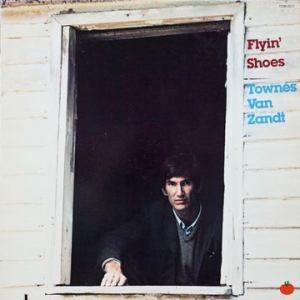 This original Tomato pressing has the kind of Tubey Magical Midrange that modern records can barely BEGIN to reproduce. Folks, that sound is gone and it sure isn’t showing signs of coming back. If you love hearing INTO a recording, actually being able to “see” the performers, and feeling as if you are sitting in the studio with the band, this is the record for you. It’s what vintage all analog recordings are known for — this sound.

What We’re Listening For on Flyin’ Shoes

This is another stalwart collection from Townes Van Zandt, and not a dud in the bunch. The melodies here are strong, the lyrics full of Van Zandt’s razor sharp insight, and the production is sparse and to the point, bringing to mind the inconspicuous polish of High, Low and in Between. The feel here is a balance between folk and country, with Van Zandt’s voice and guitar up front, letting the songs speak for themselves. The tunes are full of heartbreak and hopelessness, making it a great album to put on during, or right after, the breakup of an affair.

“No Place to Fall” sports one of Van Zandt’s strongest melodies with a melancholy chorus that immediately imbeds itself in your mind. Pedal steel, a brief mandolin solo, and almost inaudible percussion add to the despairing feel of the track. “When She Don’t Need Me” is another hopeless love song, this time with a Tex-Mex feel and a measured tempo that wrings every bit of drama out of the lyric. The title track has to be one of Van Zandt’s saddest songs; images of winter, desolate hillsides, and loneliness complement an achingly beautiful melody. “No Place to Fall” is a teary waltz, a love song that pleads for connection and tries to be seductive, but ultimately succumbs to its own pessimism.

On the slightly brighter side, there’s an Everly Brothers influenced country-rock take of Bo Diddley’s “Who Do You Love.” “Snake Song” is a blues that could be about a poisonous snake or the obvious phallic object. The song ends with a fatal punch line. “Brother Flower,” a striking meditation on mortality and the impermanence of love, has a melody that recalls Gordon Lightfoot’s “Don Quixote” while “Dollar Bill Blues” is a sea shanty celebrating gambling, booze, self-destruction, and the desperate late-night search for love, or maybe just sex.

None of the tunes on Flyin’ Shoes have yet achieved the iconic status of Van Zandt’s best-known work, but in the early 2000s, as his back catalog is being reissued and reevaluated, that might well change.