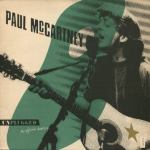 Another in our series of Home Audio Exercises. (This is one of our earliest ones, from all the way back in 2006!)

On the song Blackbird Paul moves the microphone, scraping it along the floor, which causes a huge wave of bass to envelop the room. I was over at one of my customer’s houses a while ago, doing some testing with electronics and tweaks, and I remember distinctly that the microphone stand was shrunken and lean sounding in a way I had never heard before. Now this customer, whose system was in the $100K range, had no idea what that microphone stand could really do. I did, because I’ve been hearing it do it for years.

Some speakers can’t move enough air down low to reproduce that sound. And some speakers, usually those with woofers under 12 inches, shrink the size of images. These are many things to test for for in a given system, dozens and dozens in fact, but two of the important ones are these: if it doesn’t have a solid foundation (read: a big bottom end), and it doesn’t have correctly-sized images for the instruments, that’s a system that is failing in fundamentally important ways.

If you close your eyes, you’re not in the presence of full-size musicians. Ipso facto, the fidelity to the live event has been compromised.

That’s precisely what makes this a good test disc. The band is RIGHT THERE. To the extent that you can make them sound live in your living room, you are getting the job done.

The last bit of resolution is not the point. Full-sized live musicians in your living room is the point. Either Paul and his band are in front of you, or they’re not. When they’re not, it’s time to get to work and find out what part of the system is not doing its job.

Hint: you can be pretty sure it’s the speaker. Most audiophile speakers are not very good at moving enough air. You need multiple large dynamic drivers with plenty of piston area to do the job correctly. Speakers of that design are usually large and expensive. I recommend the original Legacy Focus (not the current model) as the best sounding, most affordable full size speaker on the used market.

RECORDS THAT ARE GOOD FOR TESTING