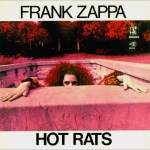 Again, a slight tendency towards the aggressive, but great music. If you like hard bop sax, this track is for you.

It Must Be A Camel

The second best sounding track on the album, and some of the best music Zappa ever recorded. You have to love all the Edgar Varese-inspired percussion.