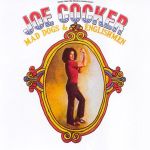 More of the Music of Joe Cocker

Well, for one thing, if you get the wrong stampers on this record, you will discover, as we did, that it’s clearly been mastered from a badly made dub. The “cassette-like” sound quality will not be hard to recognize. If you have stumbled onto one of those pressings, give up on it and try your luck elsewhere, making sure to note the bad stampers.

Most copies have a tendency to sound smeary and congested.

Listen for good transients and not too much compression.

Most copies are opaque, as well as dull up top; try to find the ones with some degree of transparency and as much top end extension as you can (the percussion will be helped most of all by the extended top).

And of course you need to find a copy that rocks, as this is a definitely a Rock Concert, although what it most reminds me of is Ray Charles doing a choice set of modern classics, mixing it up by off-handedly mixing in a few of his own. See how they all fit together? That’s how the pros do it. (The main pro in this case is Leon Russell, the mastermind of the whole operation. He clearly knows what he is doing.)

All tracks were selected and mixed by none other than the legendary Glyn Johns.

1,000 Recordings To Hear Before You Die

Joe Cocker has said that when this project began in 1970, he didn’t know most of the musicians assembled by songwriter/arranger Leon Russell for what turned out to be his most important U.S. tour. It’s easy to believe that, because there were some thirty-six people involved on stage — horn players, strings, backing singers, and an extra-large rhythm section with multiple drummers and keyboard players. Their nightly exploits were documented by a film crew that traveled coast-to-coast, and recorded by Cocker’s label, A&M Records, at several stops. (This double album was recorded at New York’s Fillmore East.)

If such an endeavor around a not-yet-huge artist seems wildly extravagant, chalk it up to the times: This was how they rolled in the early ’70s. And Cocker, another of the artists whose profile jumped after appearing at Woodstock in August 1969, looked like a safe bet. Russell, then a Svengali to several artists, believed that the grind-it-out British belter with the Ray Charles obsession could be huge if presented in the right context. So he wrote screaming arrangements of songs Cocker had been singing for years, and positioned the singer at the center of a constantly moving (and frequently gaudy) revue.

Bigger isn’t usually better in rock. But Mad Dogs works, in part because the ensemble pushes Cocker in ways few rock singers are ever pushed. He sings Traffic’s “Feelin’ Alright” as a series of boxing maneuvers, slipping his ad-libs into the (few) open spaces. He feeds off the campy vaudeville backing for the Beatles’ “She Came In Through the Bathroom Window.” And though he enjoys the power of Russell’s ensemble on the full-throttle rock numbers, Cocker is most persuasive when the heat isn’t full force: This steady-rolling version of “Cry Me a River” deserves a spot in the hall of fame, as does the sultry version of Russell’s “Delta Lady” that closes the program.

Blue Medley: I’ll Drown in My Own Tears/When Something Is Wrong
Introduction
Girl from the North Country
Give Peace a Chance

Mad Dogs & Englishmen was just about the most elaborate album that A&M Records had ever released, back in 1971, a double LP in a three-panel, fold-out, gatefold sleeve, with almost 80 minutes of music inside and a ton of photos, graphics, and annotation wrapping around it. A live recording done in tandem with a killer documentary film of the same U.S. tour, it was recorded at the Fillmore East, where the movie was a cross-country affair, and the two were, thus, completely separate entities — also, as people couldn’t “buy” the film in those days, the double LP has lingered longer in the memory, by virtue of its being on shelves, and also being taken off those shelves to be played. Unlike a lot of other “coffee table”-type rock releases of the era, such as Woodstock and The Concert for Bangladesh, people actually listened to Mad Dogs & Englishmen — most of its content was exciting, and its sound, a veritable definition of big-band rock with three dozen players working behind the singer, was unique.