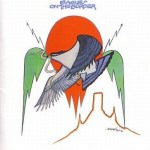 Reviews and Commentaries for On the Border

This commentary was written about fifteen years ago when we discovered how good the British originals of this album can sound.

‘You Never Cry Like A Lover’ is breathtaking on this copy — Glyn Johns is a genius I tell you!

We’re HUGE fans of the album here at Better Records; it’s some of the most sophisticated, well-crafted, heartfelt music these guys ever made, and that’s saying a lot. Many of you have probably forgotten how good this album is (assuming you were ever familiar with it in the first place) probably because the typical domestic copy you would have played back in the day is fairly hard on the ears. Most pressings, even the British ones, barely hint at the kind sound you’ll hear on this Super Hot Stamper LP!

You Never Cry Like A Lover and The Best Of My Love have SUPERB Glyn Johns Demo Disc Sound on this copy. The LIFE and ENERGY of this pressing are going to knock you right out of your seat. Most copies leave you with a headache, but this one will have you begging to turn up the volume!

Let’s talk about the Eagles’ records from an audiophile perspective.

For their debut the Eagles recorded what we consider to be one of the Ten Best Sounding Rock Records in the history of recorded media. Wait a minute, the Eagles didn’t record anything, Glyn Johns did. He deserves all the credit for turning that first album into a Demo Disc of the highest order. Partway through this album, their third, they fired him. (The British ran Winston Churchill out of office after the war, so go figure.) Johns is credited with only two tracks, and as would be expected, those two are the real Demo Disc tracks on the album.

But as I way playing various copies of these original British SYL pressings (the SYL of Desperado is the one on the TAS List, don’t you know), I could easily recognize the fully-extended, harmonically-rich, super-low distortion, Tubey Magical, Unbelievably Sweet Glyn Johns ANALOG Sound everywhere in the soundfield I happened to look. Almost every track has some of it.

Some Is Better Than None

Maybe not the full measure you hear on You Never Cry Like a Lover, the standout track from side one, but enough to make you realize that even half of a Glyn Johns recording is quite a bit better than what was to follow. One of These Nights, recorded by Bill Szymczyk, his replacement, is clearly a step down in sound quality, but it has some very strong material that got played on the radio incessantly. Of course it went right to Number One.

Say what you want about Hotel California — a long in the tooth FM radio staple but not a bad recording by any means — it can’t begin to compete sonically with the likes of the first three Eagles albums that Johns did. (And now that you’re familiar with the two main guys who recorded this band, check the dead wax of your Eagles Greatest Hits pressings for a laugh.)

As good as it may be sonically, Desperado is still a fairly weak concept album that lacks consistency in the songwriting department. With two good songs and lots of filler, the album bombed commercially as well as critically.

Which was a good thing — it forced the band to pick themselves up off the ground and get their shit together. If they were going to be the Number One Rock Band in the World — their goal at the time — they knew they needed to write and perform a much better batch of songs on their followup album, and that’s just what they proceeded to do. They called it On The Border and it produced for them their first Number One hit, The Best of My Love.

With all that in mind, here’s how we’d (informally) rank their albums.

Without question the first Eagles album is still the best.

Hotel California is a classic, no argument there, but even the best sounding copies are a little “modern” for our tastes. I prefer both the music and the sound of On The Border to Hotel CA, but that should clearly be seen as a minority opinion. De gustibus and all that. Let’s call them their second and third best, we’ll leave the order to you.

The third tier would have One of These Nights, followed by Desperado, The Long Run and Eagles Live (which we have never done a shootout for by the way). [We have since done many shootouts for both titles.]

The less said about any of their albums after 1980 the better.

You know the first album. You know Hotel California.

The best Eagles album you don’t know is On The Border.