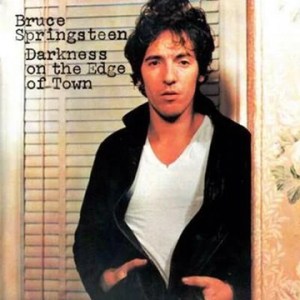 It’s not easy to find good sound on this record — or any Springsteen album, for that matter — but copies like this prove that this is a MUCH better recording than we ever gave it credit for. It’s a rare pressing that can bring this passionate, emotionally charged music to life, but the open, spacious soundstage and full-bodied tonality here are up to the challenge.

This original Columbia pressing has the kind of Tubey Magical Midrange that modern records can barely BEGIN to reproduce. Folks, that sound is gone and it sure isn’t showing signs of coming back. If you love hearing INTO a recording, actually being able to “see” the performers, and feeling as if you are sitting in the studio with the band, this is the record for you. It’s what vintage all analog recordings are known for — this sound.

In a contemporary review for Rolling Stone, Dave Marsh viewed Darkness on the Edge of Town as a landmark record in rock and roll because of the clarity of its production, Springsteen’s unique guitar playing, and the programming, which he said connected the characters and themes in a subtle yet cohesive manner. Marsh remarked that the subject matter of the songs fulfilled the hype that previously surrounded Springsteen: “What they’ve always said was that someday Bruce Springsteen would make rock & roll that would shake men’s souls and make them question the direction of their lives. That would do, in short, all the marvelous things rock had always promised to do.”

In a retrospective review for AllMusic, William Ruhlmann said that Springsteen began to fully realize his characters as working class on Darkness on the Edge of Town, whose “hard truths in hard rock settings” made for a less accessible work than Born to Run.

Rolling Stone later wrote that the album was the E Street Band’s best performance, “colored by the raw sound happening at the time”.

According to Acclaimed Music, Darkness on the Edge of Town is the 103rd most frequently ranked record on critics’ all-time lists.