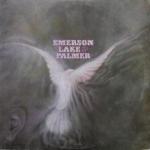 More of the Music of Emerson, Lake and Palmer

This commentary is from many years ago.

The findings from our most recent shootouts have shown us the error of our ways.

A textbook case of Live and Learn.

This is what we used to think:

The Brit copies may take top honors for side one (“sweetness, openness, tubey magic, correct tonality, presence without aggressiveness, well-defined note-like bass, extended airy highs”) but the Hot Stamper Cotillion copies KILL on side two. They really ROCK, with greater dynamic contrasts and seriously prodigious bass, some of the best ever committed to vinyl.

The Brits tend to be a bit too “pretty” sounding. They’re too polite for this bombastic music. This music needs the whomp down below and lots of jump factor to work its magic.

The Brits are super-low distortion, with a more open, sweeter sound, especially up top, but the power of the music is just not as powerful as it can be on these very special Cotillions.

This Cotillion on side one is a rare gem indeed, one of the best domestics we’ve ever heard. It’s not quite as smooth and sweet as some, but it’s every bit as good in most other areas, and better in the bass. The Cotillion pressings of this album have bass that puts 99% of all the rock records in the world to shame. (And 100% of the half-speed mastered records!)

We actually prefer the British pressings on both sides now.

Folks, this is ANALOG at its Tubey Magical finest. You ain’t never gonna play a CD that sounds like this as long as you live. I don’t mean to rain on your parade but let’s face it, digital media are pretty much incapable of reproducing this kind of sound. There are nice sounding CDs in the world but there aren’t any that sound like this, not in my experience anyway.

If you are thinking that someday a better digital system is going to come along and save you the trouble and expense of having to find and acquire these expensive original pressings, think again. Ain’t gonna happen.

This is the kind of record that shows you what’s wrong with your BEST sounding CDs. (Let’s not even talk about the average ones in our collections; the less said the better.)

Not Breaking Up Is Hard To Do

The organ that opens side two is always going to break up a tiny bit. No ifs, ands, or buts about it. In fact, if it DOESN’T break up for you, I’m going to go out on a limb and say that either your copy or your stereo is too smooth. We played somewhere between two and three dozen copies this week, and you just can’t find a hot copy without at least a hint of distortion on the organ.

The Barbarian
Take a Pebble

Again, some of the best sound to be found on any ELP album. We much prefer the tracks with vocals as opposed to the heavy keyboard ones. This is PROG at its best, right up there with Yes’s and King Crimson’s biggest and boldest musical statements. When it’s good, it’s REALLY GOOD. (Conversely, of course, when it’s bad, it’s pretty bad. Played Relayer lately?)

This is a super tough test for side two. It’s guaranteed to bring even the biggest and best systems to their knees. The organ is HUGE, so big and powerful it has a tendency to break up a bit in the loudest parts, either from groove damage or the inability of the cutting system to properly transfer the enormous amounts of bass that exist on the master tape onto the cutting acetate. You need plenty of amplifier cutting power and not every mastering chain had it.

My favorite ELP track, sounding about as good as it gets. You need the right Cotillion copy for the ultimate sound; the better bass brings Palmer’s kick drum to life, not to mention the synthesizer solo.

Listen also to the electric guitar solo in the left channel. On the best copies it really comes to life and rocks out. If it lays back in the mix you do not have a Hot Stamper for side two, I can assure you of that!

By the way, this track is cut a bit low compared to the two that precede it. It needs click or two on the volume knob to work its magic.