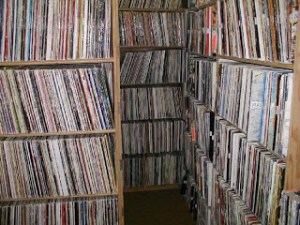 I defy anyone who has not made a lifelong study of pressing variations to tell me which of the records pictured here might have the potential for audiophile sound.

There is not a chance in the world the owner knows either, and I suspect he does not care one way of the other. If this fellow describes himself as an audiophile, he is either mistaken or setting a very low bar for the term.

He is a record collector, plain and simple.

Anyone can amass a collection of records — one this big, ten times its size or one-tenth its size, the process is the same. You just buy whatever you like and organize them whichever way you find most suitable.

There is no limit to the kinds of records one might collect: originals, imports, audiophile pressings, picture discs, the TAS List – you name it, you can collect it.

There are literally millions of records for sale around the world on any given day. They’re not hard to find, and being so common, collecting them is easy. A single collection for sale as of this writing contains more than 3 million records. That works out to a thousand records each for three thousand collectors. Do you really have time to play more than a thousand records? That’s a different record every day for almost three years!

Some people see them as an investment. We do not. We think audiophile-oriented music lovers should pursue good sounding records for the purpose of playing them and enjoying them, understanding that the better their records sound, the more enjoyable they will be.

Collecting records primarily to build a record collection that can be sold at a profit in the future should be the last thing on anyone’s mind.

If you buy records principally to collect original pressings, you will end up with one mediocre sounding collection of records, that I can tell you without fear of contradiction. (The formula goes like this: Average pressing, original or otherwise = average sound.)

On the other hand, if you want the best sounding pressings, we are the only record sellers on the planet who can consistently find them for you. This is precisely the service we offer, unique in the world as far as we know. Hence the name Better Records.

Anyone can sell originals. Only we can sell the best sound. Others could of course, but none of them have ever bothered to try, so the practical effect is the same.

Finding the best sound is far more difficult and far more rewarding for both the seller and the buyer, as any of our customers will tell you.

Hot Stampers – The Opposite of Collectible

The collector game cannot really be played with Hot Stampers. If anything they are just the opposite of a collectible, due to the fact they have practically no established or verifiable value. Their value is purely subjective; they exist only to provide listening pleasure for their owner. No other concerns have any real bearing on their worth.

I can understand why a record collector would be confused by this notion of subjective and limited value. Collecting records is mostly about buying, selling and owning various kinds of records. It’s not primarily about playing music; this seems to be a less important aspect of collecting. (I’ve known record collectors who didn’t even own a turntable!)

So all those funny numbers in the dead wax and on the label and the spine of the cover are just numbers, man. They don’t mean anything to me and they shouldn’t mean anything to you — that is, if you care about the sound of your music. If you want to collect a record because it has one set of numbers in the dead wax or the label or on the cover rather than another set of numbers, that’s your business. I guess that’s what most record collectors do. I, for one, want no part of it. I just want good sounding records. They can have any numbers they want.

Get Good Sound, Then Good Records

It’s easy to be a collector; you just collect stuff. To get your stereo and room to sound good, and know the difference when they do, that is very very hard. I’ve been at it for thirty-five years and I still work at it and try to learn new things every day. I know there’s a long way to go. Until you get your stereo, room and ears working, collecting good sounding records is all but impossible. You will very likely waste a fortune on “collector records”: the kind with Collector Value and very little else. This is the opposite of a Hot Stamper: All its value is tied up in its Music and Sound, which is where we think it should be.