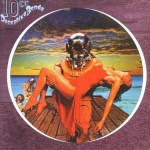 We’ve long been huge fans of this album both musically and sonically. It’s the kind of recording where the sound JUMPS out of the speakers. In that way it most reminds me of Crime Of The Century, one of the most amazing recordings in the history of popular music.

It’s also one of the most DYNAMIC popular recordings I know of. If this album doesn’t wake up your system, it’s time to scrap it and start over.

Musically it’s one of my all time favorite albums, a real Desert Island Disc for yours truly.

Pop Lunatics
This is no recreation of a live musical event, nor is it trying to be one. It’s a pair of pop lunatics let loose in their own multi-track studio doing whatever the hell they damn well please with songs they wrote and on which they play all the instruments (with the exception of some of the drum parts). That’s why this recording has such energy — it’s two guys in their very own candy store havin’ a ball, with no one around to tell them they can’t.

A Demo Disc for Dynamics

A Demo Disc for Energy