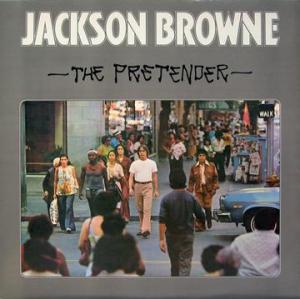 This copy is none of those things. And it positively kills the famous MoFi pressing.

This vintage Asylum pressing has the kind of Tubey Magical Midrange that modern records rarely even BEGIN to reproduce. Folks, that sound is gone and it sure isn’t showing signs of coming back. If you love hearing INTO a recording, actually being able to “see” the performers, and feeling as if you are sitting in the studio with the band, this is the record for you. It’s what vintage all analog recordings are known for — this sound.

You can easily hear that smear on the guitar transients; usually they’re a tad blunted and the guitar harmonics don’t ring the way they should.

These problems are just as common to the original Asylum pressings as they are to the later LPs. Smeary, veiled, top-end-challenged pressings were regularly produced over the years. They are the rule, not the exception.

What We’re Listening For on The Pretender

Please note that we should but too often don’t make a vitally important distinction between two words we use interchangeably on the site. There is a difference between the sound of records that we’ve played and the sound that we’ve heard.

The stereo, the listening room, our cleaning technologies and who knows what else are all undergoing constant changes. This means that we may have played a better pressing in the past but couldn’t hear it sound as good as it does now. The regular improvements we make in all areas of playback make sonic comparisons over time all but meaningless.

A songwriting prodigy since his teens, Jackson Browne had already reached a zenith in confessional writing with 1974’s Late for the Sky, a song cycle of his guitar and piano based anthems, reveries, and rockers, distilling themes of disillusionment, apocalypse, friendship, and fragile romances.

Teaming with Bruce Springsteen’s producer, Jon Landau, Browne himself clearly sought to up the ante with more epic settings, while Landau worked on pumping up the star’s vocal attack. But personal tragedy, in the suicide of his partner and mother of his young son, cast an unplanned shadow across these songs, giving The Pretender a darker, heartbroken edge and an authentic, scarred toughness.