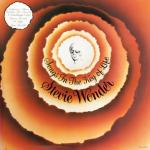 More of the Music of Stevie Wonder

This commentary was written more than ten years ago. I’ve just gone to this reviewer’s website to make sure the quote below is accurate, and everything you need to see is still up and as misguided as ever.

Some audiophiles never learn, and a great deal of this blog is devoted to helping audiophiles avoid the errors this reviewer and others like him have been making for decades. 27 years ago I wrote my first commentary about the awful audiophile records this reviewer raved about. In those 27 years it seems that nothing has changed. Bad sounding audiophile pressings get favorably reviewed by this fellow to this day.

How it is possible to spend so much time doing something, yet fail to learn anything in the process? It is frankly beyond me.

I will ask the question again: Is This a Well-Engineered Album?

How on Earth could anyone possibly know such a thing?

Some background. Years ago our first ever Hot Stamper shootout for Songs in the Key of Life had us enthusiastically singing its praises:

HOT STAMPERS DISCOVERED for one of the funkiest and most consistent double albums of all time! It’s beyond difficult to find great sounding Stevie Wonder vinyl, but here’s a copy that proves it’s possible if you try hard enough. So many copies are terrible in so many different ways — we should know, we played them. And just to be clear, this copy is far from perfect as well, but it did more things right in more places than we ever expected it would or could. And that means it showed us a great sounding Stevie Wonder record we never knew existed.

But a noted reviewer says it’s a bad recording. Does he know something we don’t?

Not exactly. The fact is he doesn’t know something we do, something he, like anybody else, could have found out had he simply done his homework. (We call them shootouts, but homework is certainly a serviceable and in some ways even more accurate description: it’s work and you do it at home.)

All it takes is one good copy to falsify the assertion this fellow makes. We in fact found more than one. But I’m quite sure we do things very differently at Better Records than they do at any reviewer’s digs, including this reviewer’s basement lair.

As you may know, a few years back he got in a dust-up over his initially negative (since revised, a story in itself) review of the Speakers Corner pressing of the album. We found it refreshing for this reviewer to be making critical comments about an in-print heavy vinyl reissue, but he eventually warmed somewhat to the sound of the record after hearing from the mastering engineer. We honestly don’t care all that much about any of it, but we couldn’t help but notice this paragraph in his review:

As with many productions of the era, there was a noticeable decrease in sound quality on this album compared to earlier Wonder releases, though no doubt the engineers thought they were making better sound here with “more”: more compression, more use of effects, more tracks and newer, more complex boards, but what was really happening was less transparency, diminished dynamics, narrower and flatter soundstages and especially less extension. This production sounds closed in, distant and listless. Bass lacks real thrust and extension and there’s little shimmer from the cymbals. “Boxy” is the operative adjective.

Really? I wonder how many different pressings this fellow evaluated before reaching his conclusions. He certainly couldn’t have heard one that sounded like the one we played. All four sides were transparent and dynamic, and I’d certainly never characterize any of them as flat, distant, listless or closed in.

And boxy? Not a chance. And we certainly have no trouble recognizing boxy sound when we hear it.

I will concede that many copies of this record would benefit from more extension up top, but that still leaves this person with a batting average low enough to have him surfing the pine on just about any softball team he cared to join.

Our Hot Stamper Copy Proves It

Sides one and four both earned very good grades. The sound is richer, sweeter, and fuller than what we heard elsewhere. Many copies we played had a phony hi-fi quality that drove us crazy, but the sound here is exceedingly natural. We also heard a ton of copies that added a nasty bite to Stevie’s vocal; I’m pleased to say that’s not an issue here. Both of these sides are positively brimming with energy, so don’t let anyone tell you that the production is listless. It might sound that way on a typical copy, but not even close on this one.

Sides two and three are darn good as well. Side two could stand to be a bit more open and side three could use a little more top end, but they’re still miles ahead of the sound on most copies out there.

Both sides have excellent presence and lovely texture to the vocals.

The Four Cornerstones of Hot Stampers

This reviewer and anyone else who thinks this is not a well-recorded album is making one or more of the following mistakes:

1.) Not playing enough copies to find a good one.
2.) Not cleaning the copies properly in order to get them to sound their best.
3.) Not playing them back properly.
4.) Not listening to them critically.

To find and appreciate Hot Stampers you have to do all four. We discuss each and every one of them in scores of commentaries and listings on this very site. None of this should come as news to anyone by now.

If you want to make judgments about recordings — not the handful of pressings you have at your disposal, but the actual recording that they are made from — you have to do your homework, and you have to do it much more thoroughly than most audiophiles (including the one quoted) seem to think is necessary.

Wrong? Welcome to the Club

He keeps coming up with the wrong answer, but so would we if we couldn’t find enough copies, clean them right, play them right, or listen carefully and critically to them.

And here’s how we know that the above statement is true. We used to not do it this way, and we were pretty much in agreement with this fellow about the sound of the album. We would have described the sound using terms not that different from the ones he used.

How It Used to Be

It’s an open question as to whether we could have played this album properly ten years ago. I have my doubts. But the good news in audio is that things change. It’s amazing how many records that used to sound bad now sound pretty darn good. The site is full of commentaries about them. Every one of them is proof that comments about recordings are of limited value.

You have a choice. You can choose to go with this reviewer’s approach, which is in fact the approach that most audiophiles use. Then it’s simply a matter of accepting that many “recordings” don’t live up to your standards. Prepare to allot a fair amount of time to complaining about such an unfortunate state of affairs.

Or you can follow our approach and hear those very same albums sound much better than you ever thought possible. This has the added benefit of freeing up time that would normally be spent bitching about the bad sound of some record, which in turn makes more time available for pleasurable listening to the record you got from us.

You also probably won’t feel the need to go on audiophile forums to argue the merits of this or that pressing. You will already own the pressing that settles the argument. (Keep in mind that your pressing only settles the argument for you; nobody else will believe it. And why should they? They have never heard your copy. It would take quite a leap of faith to believe that your copy sounds so much better than the one they own, when the one they own looks just like it. But this is precisely what Hot Stampers are all about. Records may look the same but they sure don’t sound the same.)

Unfortunately we can’t do it all for you. Most of what is important in audio you have to learn to do for yourself. We can find you the best sounding pressings; that’s the easy part. Figuring out how to play them, and learning how to critically listen to them, well, that’s a fair bit harder. That part takes a lifetime. At least.

This hobby is supposed to be fun; sometimes it is, sometimes it isn’t. But if you enjoy doing it at least some of the time, and you make a good effort, and devote the proper resources to it, you will no doubt take enormous pleasure from it.

And One More Thing

Speakers Corner says they make all their records from original master tapes. No one should believe them without proof, especially since proof would be so easy to supply. Put a picture of the master tape boxes on your website for all to see. When they show you those pictures, then you can believe it. Until then I would be highly skeptical. Labels lie about these things all the time, and I see no reason to believe Speakers Corner is any more careful with the truth than the other companies producing reissues.