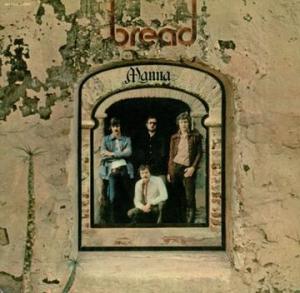 This original Elektra pressing has amazingly sweet and rich 1971 ANALOG sound on both sides. That big bottom end and the volume of space that surrounds all the instruments and singers are the purest and most delightful form of Audiophile Candy we know.

We used to think that only the Best of Bread album could get those two songs to sound as luscious and Tubey Magical as they do when they’re playing in our heads, but it seems we were wrong — they’re positively amazing on the best copies of Manna, and this is a VERY good copy indeed.

When you hear music sound this good, it allows you to appreciate the music even more than the sound. This is in fact the primary raison d’etre of this audiophile hobby, or at least it’s supposed to be. To hear the vocal harmonies that these guys produced is to be reminded of singers of the caliber of The Everly Brothers or The Beatles. It’s Pure Pop for Now People, to quote the famous wag Nick Lowe.

In many ways this recording is state-of-the-art. Listening to the Tubey Magical Acoustic Guitars on the best copies brings back memories of my first encounter with an original Pink Label Tea for the Tillerman. Rich, sweet, full-bodied, effortlessly dynamic — that sound knocked me out twenty-odd years ago, and here it is again.

Of course I’m a sucker for this kind of well-crafted pop. If you are too then this will no doubt become a treasured demo disc in your home as well.

What We’re Listening For on Manna

On the better Hot Stamper copies, the ones with especially sweet and rich ANALOG sound, the credit obviously must go to their brilliant engineer, Armin Steiner, the man responsible for recording some of the best sounding, most Tubey Magical Chart-Topping Pop Rock for this band throughout the ’70s. As would be expected from success on such a scale, Steiner has more than a hundred other engineering credits. He’s also the reason that Hot August Night is one of the best sounding live albums ever recorded.

When you find his name in the credits, there’s at least a chance that the sound will be very good. You need the right pressing of course, but the potential for good sound should be your working hypothesis. Now all it takes is some serious digging in the record bins, tedious cleaning and even more tedious critical listening to determine if you’ve lucked into a diamond in the rough. Or, if you prefer, allow us do all that work for you. After 30 years in the business, we’re gotten pretty good at it.

Bread’s third album, Manna, isn’t so much a step forward as it is a consolidation of strengths, as the group sharpens their skills and carves out their own identities.

It’s clear that the rift between David Gates and Robb Royer and James Griffin is beginning to take shape, as the album is evenly divided between Gates tunes and Royer/Griffin compositions. This benefits the album, since it spurs each member to greater heights, and they even tend to sequence the record in ways that support that sentiment — Gates’ “Let Your Love Go,” complete with its rockin’ harpsichords, is followed by the hard-driving verses of “Take Comfort,” which, admittedly, is tempered by a dreamy chorus.

And while some of the rougher edges present on Bread or On the Waters are sanded down slightly, they’re still there, providing good contrast to such soft pop landmarks as “If.” Yet, this is a record that is laid-back and even tempered, which isn’t a bad thing — it results in a fine listen, especially since the group’s songwriting remains at the high standard instituted on that first Bread album.