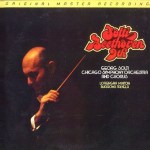 Reviews and Commentaries for the Music of Beethoven

MoFi took a mediocre-at-best Decca recording from 1972 and made it worse.

They should not have chosen this performance of the Ninth Symphony in the first place, and they certainly should not have added the treble they chose to add, which they did to this title, and to every classical recording they remastered.

Two strikes. In this case, two strikes and you’re out.

If you want the best Ninth on vinyl that we know of, this is the one we recommend.

This is a Hall of Shame pressing and another MoFi LP with ridiculously unnatural sound.

Full of the worst kind of bright, phony string tone, MoFi’s trademark sound for classical recordings. Anyone who has ever attended a concert knows that strings in real life simply do not sound anything like they do on these MoFi records.

The London and Decca pressings of this recording are no great shakes either. Any pressing of this performance should be avoided.

Londons and Deccas from this era (1972 in this case) rarely sound very good to us.

Here is what we specifically don’t like about their sound.

An Overview of the Ninth

The best pressings from the Readers Digest set with Leibowitz conducting were passable but no match for Ansermet and the wonderful hall the legendary Orchestre De La Suisse Romande recorded in. (We like the 4th and 5th from that set; if you own them give them a spin, if you can clean them properly you may be quite pleased.)

In 1972 the engineering team of Gordon Parry and Kenneth Wilkinson recorded a Ninth with Solti and the CSO for Decca. I believe it was on the TAS List for a very long time.

We played it recently and heard the usual problems associated with later Decca recordings. It’s opaque, lacks size and space, and comes off as a bit flat and dry.  Like practically every later Decca pressing we play, it’s passable at best.

If you want to know what’s wrong with the Mobile Fidelity, take the above faults and add some others to them. Start with an overall brighter EQ, add a 10k boost for extra sparkly strings, the kind that MoFi has always been smitten with, and finish with the tubby bass caused by the half-speed mastering process itself.

Voila! You are now in the presence of the kind of mid-fi trash that may have fooled some audiophiles back in the day but now sounds as wrong as the records this ridiculous label is still making today.

The later ’60s Decca/London cycle with Schmidt-Isserstedt and the Vienna Phil has sounded flat and modern to us on every pressing we have ever played. We simply cannot take them seriously and you shouldn’t either.