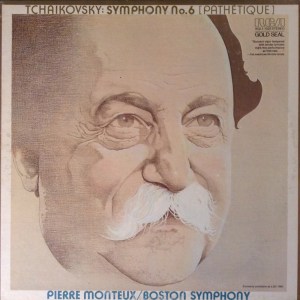 Presenting a first for Better Records: a White Hot Stamper copy of this CORRECTLY remastered version of LSC 1901, which just happens to be a recording from the earliest days of stereo, 1955! It’s guaranteed to KILL any and all original Shaded Dogs, as well as the more common reissues; White Dogs, Red Seals, Victrolas, Classic Heavy Vinyl, you name it — this pressing will beat the pants off of it and in the process show you precisely what is wrong with each and every one of them.

This vintage RCA Gold Seal pressing has the kind of Tubey Magical Midrange that modern records can barely BEGIN to reproduce. Folks, that sound is gone and it sure isn’t showing signs of coming back. If you love hearing INTO a recording, actually being able to “see” the performers, and feeling as if you are sitting in the studio with the band, this is the record for you. It’s what vintage all analog recordings are known for — this sound.

What The Best Sides Of Symphony No. 6 (Pathétique) Have To Offer Is Not Hard To Hear

What We’re Listening For On Symphony No. 6 (Pathétique)

Tchaikovsky’s Sixth Symphony is forever associated with the tragedy of his sudden death. In the last year of his life, 1893, the composer began work on a new symphony. Sketches dated from as early as February, but progress was slow. Concert tours to France and England and the awarding of a doctorate of music from Cambridge cut into the time available for composition. Thus, though Tchaikovsky could compose quickly when the muse was with him, it was not until the end of August that he was able to complete the Sixth Symphony. Its premiere, with the composer himself on the podium, was given in St. Petersburg two months later, on October 28. The work seemed unusually somber, particularly in its finale that, both in tempo and dynamics, fades into nothingness.

Tchaikovsky’s brother Modest suggested at the time that the work ought to be called by the French word “pathetique,” meaning melancholy, and Tchaikovsky supposedly agreed, but if Modest or anyone else bothered to ask the reason behind the symphony’s gloomy mood, Tchaikovsky’s answer is lost to time. His only remembered comment about the new piece is, “Without exaggeration, I have put my whole soul into this work.