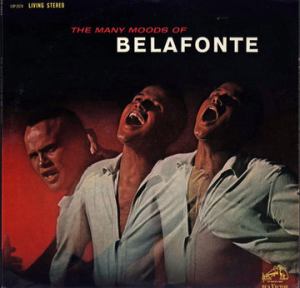 What We’re Listening For on The Many Moods of Belafonte

Belafonte’s follow-up album to The Midnight Special is another record stressing the diversity of world music. This time, a small combo accompanies Belafonte on the various tracks, as opposed to the big band approach of his last album. Several crowd-pleasers were introduced on this album for the first time: the calypso “Zombie Jamboree,” which soon replaced “Matilda” as Belafonte’s epic audience participation song; and the showtune “Try to Remember,” from the off-Broadway show The Fantasticks.

The two highlights on the album are both songs dealing with American folk music. “Betty an’ Dupree” is a classic murder ballad in the tradition of “Frankie and Johnny,” performed with the intensity the subject matter commands. Country-western composer Merle Travis’ “Dark as a Dungeon,” a protest song dealing with the dreary, bitter life of the coal miner was inadvertantly recorded during a thunderstorm, giving the song a dose of ominous spontaneity. Two of Belafonte’s proteges from South Africa are also featured: singer Miriam Makeba and jazz trumpeter Hugh Masekela.