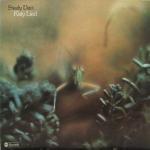 Roger, we’re so happy to know that your love for Katy Lied has finally been requited after all these years. The reason we go on for days about the sound of practically every track on the album (the green commentary below) is that we love it just as much as you do.

We struggled ourselves from one bad pressing to another. Eventually, with better cleaning fluids, better equipment and tons of pressings at our disposal, we broke through the Bad ABC Pressing Barrier and discovered the copies that had the real Katy Lied Magic.

Everything you said was true. We are especially heartened by the fact that you cited Chain Lightning as a high point of the album we sent you. Your copy, earning a grade of A+ for side two, was a couple of steps down from the best — but it still sounds great! You don’t have to buy the Ultimate Copy to get sound that beats the pants off any “audiophile” pressing, any import, any anything, man.

It’s Not About The Money

You and I both know it’s not about the three hundred bucks. It’s about some of the best music these guys ever made. It’s about their ambitious yet problem-plagued recording surviving the record label’s mass-production-on-the-cheap, opting to stamp the sound on a slice of not-particularly-good vinyl. It’s about the search for that rare pressing with the kind of sound that conveys the richness and sophistication of Becker and Fagen’s music, music that I’ve been listening to since 1975 and do not expect to tire of any time soon (so far so good: as of 2013 this is still my favorite Dan album). [Still true as of 2022.]

So what if it took thirty years to finally get hold of a good one? With a little luck we’ll both be listening to this album for another thirty years, and that works out to the very un-princely sum of ten bucks a year.

I wish I could have sneaked a tape recorder into the studio. I sure wouldn’t have gone in for that crazy DBX Noise Reduction system they used. That alone would have saved us all a decade or two of suffering (unless you like the sound of two trash can lids crashing into each other).

Righting Past Wrongs, One Disc at a Time

But we’re doing what we can now to remedy ABC’s past wrongs — digging through piles and piles of crappy copies to find that rare and elusive diamond in the rough. It may look like any other ABC pressing, but take it from our friend Roger here, it sure doesn’t sound like one.