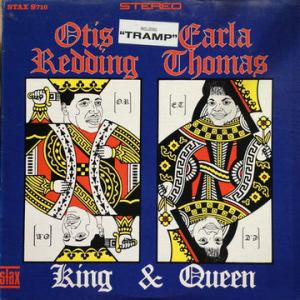 This vintage Stax pressing has the kind of Tubey Magical Midrange that modern records can barely BEGIN to reproduce. Folks, that sound is gone and it sure isn’t showing signs of coming back. If you love hearing INTO a recording, actually being able to “see” the performers, and feeling as if you are sitting in the studio with the band, this is the record for you. It’s what vintage all analog recordings are known for — this sound.

What We’re Listening For on King and Queen

New Year’s Resolution
It Takes Two
Are You Lonely For Me Baby
Bring It On Home To Me
Ooh Carla, Ooh Otis

Otis Redding never recorded a lighter, more purely entertaining record than King & Queen, a collection of duets with Stax labelmate Carla Thomas. In all likelihood inspired by a series of popular duets recorded by Marvin Gaye — indeed, “It Takes Two,” Gaye’s sublime collaboration with Kim Weston, is covered here — the record serves no greater purpose than to allow Redding the chance to run through some of the era’s biggest soul hits, including “Knock on Wood,” “Tell It Like It Is,”and “When Something Is Wrong with My Baby,” and while clearly not a personal triumph on a par with either Otis Blue or The Dictionary of Soul, the set is still hugely successful on its own terms.

Redding and Thomas enjoy an undeniable chemistry, and they play off each other wonderfully; while sparks fly furiously throughout King & Queen, the album’s highlight is the classic “Tramp,” where their battle of the sexes reaches its fever pitch in supremely witty fashion.