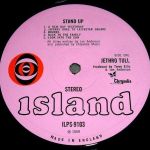 More Reviews and Commentaries for Stand Up

Simply put: Since no two records sound alike, it follow that the right label doesn’t guarantee the right sound. A shootout years ago illustrated both of these truths.

What surprised the hell out of us was how bad one of the Pink Label sides sounded. It was shockingly thin and hard, practically unlistenable. Keep in mind that during our shootouts the listener has no idea which pressing is being played, so imagine hearing such poor reproduction on vinyl and then finding out that such bad sound was coming from a copy that should have been competitive with the best, on the legendary Pink Island label no less. (Of course the other Pinks were all over the map, their sides ranging from good to great.)

The audiophiles who collect records by label are asking for trouble with Stand Up. If the want the best sound, that is.